Everyone enjoys a pat on the back, especially when the recognition comes from one’s peers, so when Jessica Fortt, manager of Dunraven Stud in Wales, was named Employee of the Year at the recent Godolphin Stud and Stable Staff Awards, she could feel justifiably proud.

The fact that Jessica’s nomination came through the stud category, among four qualifying sections from which the winner was decided, makes her achievement all the greater. At the same time, her success reflects huge credit on the breeding industry as a whole, for this is the first time a stud representative has won the overall title.

I must own up to having had slightly mixed personal feelings when the results were announced. One of the runners-up to Jessica in the Stud Staff category was Ron Lott, who has been stallion man at Shadwell Stud during the whole time I have worked for Sheikh Hamdan. In fact, Ron has been at Shadwell throughout its history, for he was already there when Sir John Musker sold the stud farm in 1984.

Ron came into the industry through a chance meeting with the Queen Mother’s first retained jump jockey Tony Grantham, who ran a farm but also trained point-to-pointers when he retired. At the time, the stable had a young, aspiring amateur called Brough Scott, who, of course, is Chairman of the Godolphin panel. I’m sure that didn’t give Ron any extra marks, but it did provide them with plenty to talk about after the judging.

Ron is just the sort of character who can ‘sell’ the stud business, a sentiment that applies equally to Jessica and the other Stud Staff category runner-up Dale Clements, who is now lead stud groom at Cheveley Park Stud, having joined them as a 19-year-old in 1988.

All three finalists are shining examples for the industry, with a huge passion for their work, and through the TBA we will be looking to use them as ambassadors, highlighting what they have achieved as a means of finding new recruits, as well as demonstrating to those already in the industry that there is a worthwhile career path. In the first place I hope their success can break down some of the reluctance that stud owners and managers have shown in the past to put forward employees’ names for the Godolphin Awards.

On a personal level, they can help in recruiting people into the industry, making it more accessible through such occasions as visits to colleges and educational establishments, as well as careers forums, where the TBA’s training and education team are extremely active. It sometimes helps to have someone on hand who’s directly involved in the day-to-day business, as well as someone from headquarters, because they can convey their passion and give the inside story, which in turn sparks interest.

Both Jessica and Ron started in racing, but they have shown that this is not the be-all and end-all of working with thoroughbreds. Racing can be a demanding, physical sport, which doesn’t suit everyone, but there are transferable skills that are ideally suited to working on a stud.

Jessica got her grounding at the British Racing School, but injury ended a promising career as an apprentice and 16 years ago she joined Dunraven Stud, where she now acts as a Jill of all trades, from dealing with the administration and handling stallions to foaling down and breaking in the yearlings.

Whereas she is at the younger end of the age scale, Ron and Dale have been in the industry for many years, and their examples demonstrate the career structure that is available. To all of them, congratulations.

And similar plaudits go to Lady Oaksey, the Bradstock family and all those associated with Coneygree for his thrilling all-the-way victory in the Cheltenham Gold Cup. British-bred through and through, he provided a fantastic triumph for the small owner/breeder, and an inspiration for everyone. 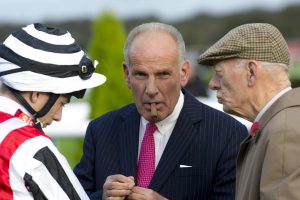 Up Next
Prescott dreaming of Guineas glory