By The Owner Breeder staff 24 September 2020

The first session of the relocated Goffs Sportsman’s Sale held in Doncaster saw a son of Footstepsinthesand top proceedings when selling to bloodstock agent Kevin Ross for £50,000.

Consigned by Rockfield Farm, the colt is the second foal out of the winning Danehill Dancer mare Harpist and is a brother to Star Of Orion, who struck on debut for trainer Ralph Beckett over 6f at Newmarket in June.

First-season sire Mehmas is continuing to excel with his stock and Tally-Ho’s freshman was responsible for the second and third top lot during Thursday’s session.

The most expensive of the two was a colt out of the placed Viking Ruler mare Crafty Notion, who was snapped up by BBA Ireland for £47,000. Offered by Kilmoney Cottage Stud, the colt is a half-brother to the Listed winner Just Sherry and is from the family of Cockney Rebel.

That was followed by Grange Hill Stud’s daughter of Mehmas who was purchased by Eddie Lynham for £44,000. 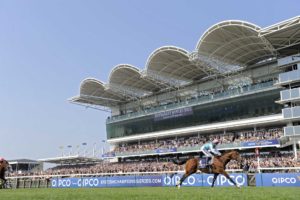 Up Next
Stage set for Cambridgeshire meeting