The Tattersalls December Foal Sale concluded with sale and demand figures broadly comparable to levels last year, suggesting momentum from the yearling sales had carried over.

Despite worries about the effect of over-production, turnover reached 30,568,350 gns. Although below last year’s record-breaking total, this becomes the fourth consecutive year that the 30 million gns mark has been surpassed.

There were 76 lots over the four days that made 100,000 gns or more which is one shy of the all-time record. Not only this, the median was up by 1,000 while the clearance rate for the sale was appreciably higher than last year.

A filly by Dansili topped the sales list after being purchased by Peter Doyle at 600,000 gns.

Offered by West Blagdon Stud, she is out of High Heeled who happens to hold the record for the most expensive foal to be sold at this sale.

The mare was formerly trained by John Gosden for George Strawbridge and was a Group 3 winner, as well as achieving a place in the Epsom Oaks.

Sheikh Mohammed’s bloodstock advisor, John Ferguson, was particularly active throughout the sale taking three of the top ten lots. Two of those were knocked down to 375,000 gns including a Sea The Stars colt out of Something Mon and a chestnut Shamardal colt.

The latter is by La Collina, who won the Group 1 Matron Stakes as a four-year-old for County Kildare-based trainer Kevin Prendergast.

Tattersalls Chairman, Edmond Mahoney stated that the decision made early in the year to return to the traditional four day format of the sale played the biggest part in terms of the strength and success of this year’s sale.

Mahoney said: “The strength and depth to the market at Books 1 to 4 of the Tattersalls October Yearling Sale has been reflected in the sustained demand we have witnessed from start to finish of the 2016 December Foal Sale.”

He added: “On each of the four days we have achieved improved clearance rates over the equivalent days last year, we have had an impressive 76 foals selling for 100,000 guineas or more, only one short of the record, an improved median and turnover in excess of 30 million guineas for the fourth consecutive year.

“International buyers from as far afield as Australia, Japan and the USA have all made an impact, but as ever we must pay tribute to the huge number of pinhookers who form the backbone of this unique market and who will be bringing so many of this week’s purchases back to our October Yearling Sale in 2017.” 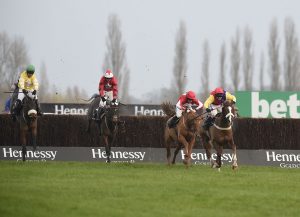