The son of Kodiac was quick to come to hand last year, also winning the Listed National Stakes at Sandown Park and later signing off with a third to Golden Pal in the Breeders’ Cup Juvenile Turf Sprint.

“I’m delighted that Mickley Stud is to stand Ubettabelieveit as he’s a really good-looking son of the highly successful sire Kodiac, whose sons are proving to be sire sons as well,” said Richard Kent.

“Kodi Bear, Adaay, Prince Of Lir and Coulsty have all sired Group-winning two-year-olds, and Ardad, who also won the Flying Childers Stakes, has sired the Middle Park and Prix Morny winner Perfect Power from his first crop of impressive two-year-old winners this season.

“I’m grateful to Martin Webb and Nigel Tinkler for giving me the opportunity to acquire Ubettabelieveit, and also that they’re retaining shares in him and will be supporting him.

“We’ll be making shares available to breeders and will be announcing further details regarding nomination fee after the conclusion of the October Yearling Sales.”

Nigel Tinkler said: “Ubettabelieveit is one of the fastest horses that I have trained and completely sound in every way. His attitude was completely professional and all he wanted to do was please you.”

Bred by Ringfort Stud, Ubettabelieveit is a half-brother to Group 3 winners Tropical Paradise and Harlem Shake and out of the winning Mujadil mare Ladylishandra. He shares his sire, Kodiac, with the successful young sires Kodi Bear, Ardad, Coulsty, Prince Of Lir and Adaay. 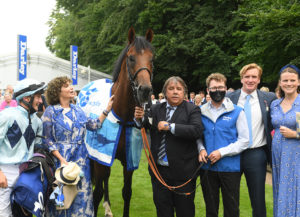 Up Next
Starman retired to stand at Tally-Ho Stud