The BHA announced this week plans to boost jump racing in the north by launching a new ‘Northern Lights Series’.

The initiative is aimed at mid-tier jump horses at tracks from Doncaster northwards. There will be 47 qualifying races held at 14 racecourses in the north from January to November next year.

These series of races will made of Class 4 handicaps and will also feature a handful of Class 5 handicaps.

Carlisle will then host the series final day on December 3, a card consisting of five Class two handicaps, ranging from two to three miles.

Each series final race will be worth £25,000, with the Listed Houghton Mares Chase at the tail end of the day bringing the total days prize money up to £150,000.

Richard Wayman, Chief Operating Officer for the BHA, said: “The creation of the Northern Lights Series reflects a determined and ongoing commitment by the industry to support jump racing in this region.”

He continued. “Although there have been improvements in prize money and the quality of the programme at some northern racecourses, there has been a worrying decline in the population and quality of jump horses being trained in the region over recent years.

“This series has been designed to provide an immediate boost to participants in the north by giving the connections of mid-tier horses the opportunity to target some valuable prizes. We know such schemes are popular with grass roots owners and this series has been set at a level where it will provide a realistic target for many of the horses currently in training in the north.”

It is hoped the Series will help to tackle an issue which has been simmering under the surface for some time now. The greater opportunities provided by this incentive aim to push growth at the grassroots level in the north.

The Northern Lights series will give us all something aspirational

However the series are not confined purely to horses trained in the north, but any horse wanting to take place on finals day will be required to run in at least two qualifying races. In these races they must be placed eight or higher.

“It is very exciting to have a jumps series such as this to benefit the northern based owners and trainers. The Northern Lights series will give us all something aspirational and valuable to aim towards with jumps horses who are competing at below the highest level, it’s an excellent incentive to own and train jumps horses in the north,” added Dumfriesshire-based trainer James Ewart. 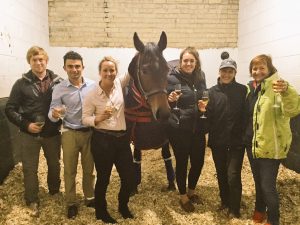 Up Next
First rules victory for Murphy