Lucarno, who won the 2007 St Leger and Great Voltigeur Stakes for owner/breeder George Strawbridge, recorded his first winner on January 17 when three-year-old Iggy prevailed on his second start at Wolverhampton, landing the six-furlong maiden by a length and a half.

A rare stallion son of the late Three Chimneys resident Dynaformer, Lucarno started his stud career at Wood Farm Stud in Shropshire before being relocated to France when Bill Bromley wound down his stallion operation. The nine-year-old now stands at Haras de Saint Voir in Normandy.

His full-brother Thought Worthy, who, like Lucarno, was trained by John Gosden before his sale to Australia, also won the Great Voltigeur and was fourth in last season’s Derby, while another brother, Flying Officer, now three and a maiden winner on debut last year, remains in training at Gosden’s Clarehaven Stables in Newmarket.

Iggy is one of just four runners for Lucarno to date and was second on his first racecourse appearance on January 4 before getting off the mark. He is trained by his breeder Mick Easterby and is the first foal of the Vettori mare Fujakka, a multiple sprint winner in Italy. 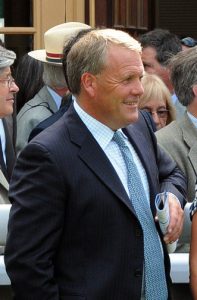 Up Next
Darley mourn loss of Michael Buckley