Davy Jones to be honoured at Lingfield
Stories

We have become very accustomed in recent years to seeing big races won by horses who had attracted virtually no interest at the sales as youngsters. Even by the standards of the likes of Snow Fairy, Takeover Target and Dunaden, though, the victory of the Irish-bred five-year-old Willyconker in the Grade 1 Frank E. Kilroe Mile in California is eye-catching.

Pyrus, who started his stud career in Ireland before moving to Spain

Willyconker, who was bred by Islanmore Stud, was sold as a yearling by Milltown Park Stud at the September Yearling Sale at Goresbridge in 2008 for €1,000, bought by Susan Leahy. Trained in Co. Limerick by her father Augustine, Willyconker, racing for the Irish Equine Syndicate, showed promise in three maiden races as a two-year-old before switching to nursery company. He won his first two nurseries, both at Dundalk in November 2009, and this led to his sale to Californian interests. Now, racing from Doug O’Neill’s barn at Santa Anita, he is a Grade 1 winner, courtesy of his victory in the Frank E. Kilroe Mile on firm turf at Santa Anita.

Willyconker is the first Group/Grade 1 winner sired by the Mr Prospector stallion Pyrus, the 2000 Richmond Stakes winner who initially stood at Ballyhane Stud before being sold to Spain in advance of the 2010 season. This victory further raises the international profile of Pyrus, who has sired stakes winners in England, Ireland, France, Australia, New Zealand and Norway. 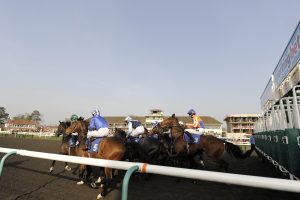 Up Next
Davy Jones to be honoured at Lingfield