The first foal for the world champion Frankel arrived in Ireland on Saturday evening when the Danehill Dancer mare Chrysanthemum gave birth to her first foal, a colt, at Coolmore.

A dual Group 3 and multiple Listed winner for David Wachman, Chrysanthemum was one of a handful of mares to be offered in foal to Frankel at last season’s breeding stock sales. She was bought for 800,000gns at Tattersalls.

Her foal is bred on the same cross as the one expected next month by dual Oaks winner Dancing Rain, who was also sold at Tattersalls’ December Sale and was knocked down to Sheikh Mohammed’s bloodstock advisor John Ferguson for 4 million gns.

Frankel stands at Banstead Manor Stud for Juddmonte Farms, which issued the following statement on Wednesday: “Juddmonte Farms are pleased to report the arrival of the first foal by world champion racehorse Frankel. Dual Group-winning mare Chrysanthemum produced an attractive bay colt at 20.30 on Saturday, January 11 at Coolmore Stud in Ireland. The stud reported that the foal is a handsome colt with a good head, a white blaze and great presence.”

Juddmonte Farms General Manager Philip Mitchell added: “From the reports that I have received Frankel’s first foal is everything we could have hoped for. These are very exciting times for everyone who has supported the horse and we much look forward to the rest of his first crop of foals.” 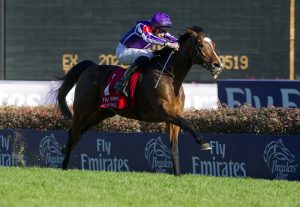 Up Next
St Nicholas Abbey dies at seven