By The Owner Breeder staff 30 September 2012

Francois Doumen is no stranger to top-level success but his big-race wins in Britain have always come in the National Hunt sphere, so the trainer was delighted to gain his first Group 1 victory on the Flat in the UK when Siyouma won Saturday’s Kingdom Of Bahrain Sun Chariot Stakes at Newmarket. 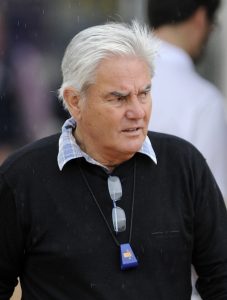 Siyouma raced prominently under Gerald Mosse before taking the lead a furlong from home and kept on strongly for a three-quarters of a length success. Elusive Kate ran a good race to be second after stumbling coming out the stalls and displacing a front show, while Laugh Out Loud held on for third after making the running.

Doumen, who has been responsible for such top-class jumpers as The Fellow, Nusala, Baracouda and First Gold, said: “It is wonderful to win a Group 1 on the Flat in England.

“Siyouma is the most satisfactory thing in the world. She is easy to train – she has an easy temperament and is very calm. Gerald said she won with something in hand today.

“She has been improving throughout the season and when she ran in the Falmouth Stakes in July she was still quite immature as she didn’t run much as a three-year-old.”

The statuesque four-year-old daughter of Medicean, who is a half-sister to the Prix Jean-Luc Lagardere winner Siyouni, was a stand-out in the paddock, not least because she was so much bigger and stronger than her assembled rivals.

Siyouma was purchased for €220,000 from her breeder the Aga Khan at last year’s December Sales for owner/breeder Robert Jeffcock, who is assembling a well-credentialed broodmare band at his Haras de Guergue in Normandy.

Doumen is not sure yet whether she will remain in training as a five-year-old but said with his characteristic wit: “I’m prepared to buy flowers for the owner if he will let me train her next year.”

The trainer indicated that Siyouma could head next to the Grade 1 the E P Taylor Stakes at Woodbine in a fortnight’s time, while races in Japan and Hong Kong are also possibilities.

Up Next
Horsemen’s Group has full support