‘They got the brief, delivered the goods and we are delighted to have been able to produce a strong sale which has generated some sizable gains in the key figures’

Supported by an eight per cent increase in average and 23 six-figure lots, the 2022 renewal of the Goffs UK Premier Sale closed on Wednesday evening in Doncaster having lived up to, and even surpassed, expectations.

The Goffs UK team had stayed true to the essence of the sale by compiling a catalogue of sharp, racy, ‘Donny’ types and buyers reacted by demonstrating a great enthusiasm for horses at all levels of the market, resulting in an 89 per cent clearance rate and turnover of £15,987,500. While the figures still fall behind those achieved in 2019, it has to be remembered that the late Sheikh Hamdan’s Shadwell Estates was still a major player at this sale back then. Indeed, Shadwell bought three of the top ten lots that year; by comparison, this year’s top 12 lots fell to nine different individual buyers.

Night Of Thunder was all the rage, with progeny by the Darley stallion accounting for both of the top two lots led by a £240,000 filly out of Thiswaycadeaux sold by Tally-Ho Stud to Blandford Bloodstock.

Pinhookers were well rewarded with 74 of those 122 through the ring seemingly selling for a profit. There were some significant touches along the way, notably a Dark Angel colt whose value leapt from 40,000gns to £200,000 for Guy O’Callaghan and a Too Darn Hot colt who blossomed from a 70,000gns foal into a £150,000 yearling.

“The last few days have been absolutely outstanding and, on behalf of the Goffs UK team, we must thank everyone that has made this sale such an incredible success,” said Goffs UK Managing Director Tim Kent. “We were confident we had a good catalogue coming into this week but you can only hope that others agree and whilst one noted industry professional said that we ‘were not missing anyone’, another noted that there were ‘better horses here this year’. These comments are great to hear in the build up to any sale, but the level of the market can only really be measured in the sales ring and those comments certainly came to fruition with an outstanding trade from start to finish and a wonderful atmosphere throughout the sales complex. This helped to deliver 23 horses that sold for a six-figure sum whilst seven made £200,000 or more. This was matched by an impressive 89% clearance rate and a top price of £240,000.

“Our focus for this sale was quality, precocity and athleticism and the feedback from buyers is that we achieved exactly that. We had a complex full of the traditional ‘donny rockets’ which is very much true to the mantra on which this sale was founded and has thrived. To our vendors, we want to extend a huge thanks for their support. They got the brief, delivered the goods and we are delighted to have been able to produce a strong sale which has generated some sizable gains in the key figures.

“To our buyers, it was a huge turnout from everyone involved, it made for a brilliant atmosphere. We have had countless positive comments on the quality of the catalogue and the type of horse here, and that the sale is back where it belongs, praise that means a lot to the Goffs team. We extend our sincere thanks and we look forward to seeing our athletes tearing up the tracks as two-year-olds next year.”

Sire power is everything in this market and while there were only two opportunities to land a yearling by Night Of Thunder, whose Group 2-winning son Isaac Shelby adorns the catalogue cover, those consignors who took the decision to direct their stock by the sire to Doncaster were extremely well rewarded.

On Tuesday, Mountarmstrong Stud’s Night Of Thunder colt out of Pious Alexander stole the show when sold for £230,000 to Mark McStay of Avenue Bloodstock and there was more of the same on Wednesday as a smashing filly out of the Listed-placed Thiswaycadeaux realised £240,000 to Stuart Boman of Blandford Bloodstock.

As a result, Darley’s Night of Thunder ended the sale with a whopping average of £235,000 for two sold.

In the case of Wednesday’s top lot, she capped a marvellous sale for her breeder Tally-Ho Stud, who purchased her dam Thiswaycadeaux, a granddaughter of Group 3 winner Harmless Albatross, while carrying the filly out of Willie McCreery’s yard.

“My client particularly likes Night Of Thunder,” said Boman after outbidding Richard Knight and Mark McStay. “I thought she is an outstanding filly, she behaved impeccably the whole time over the three of four days I have seen her.

“It is a family I have a strong connection with, I bought [Group 2 winner] Red Sea in the second dam and the family has just exploded. Night Of Thunder is doing a fantastic job, he seems to have a new stakes winner every week.” 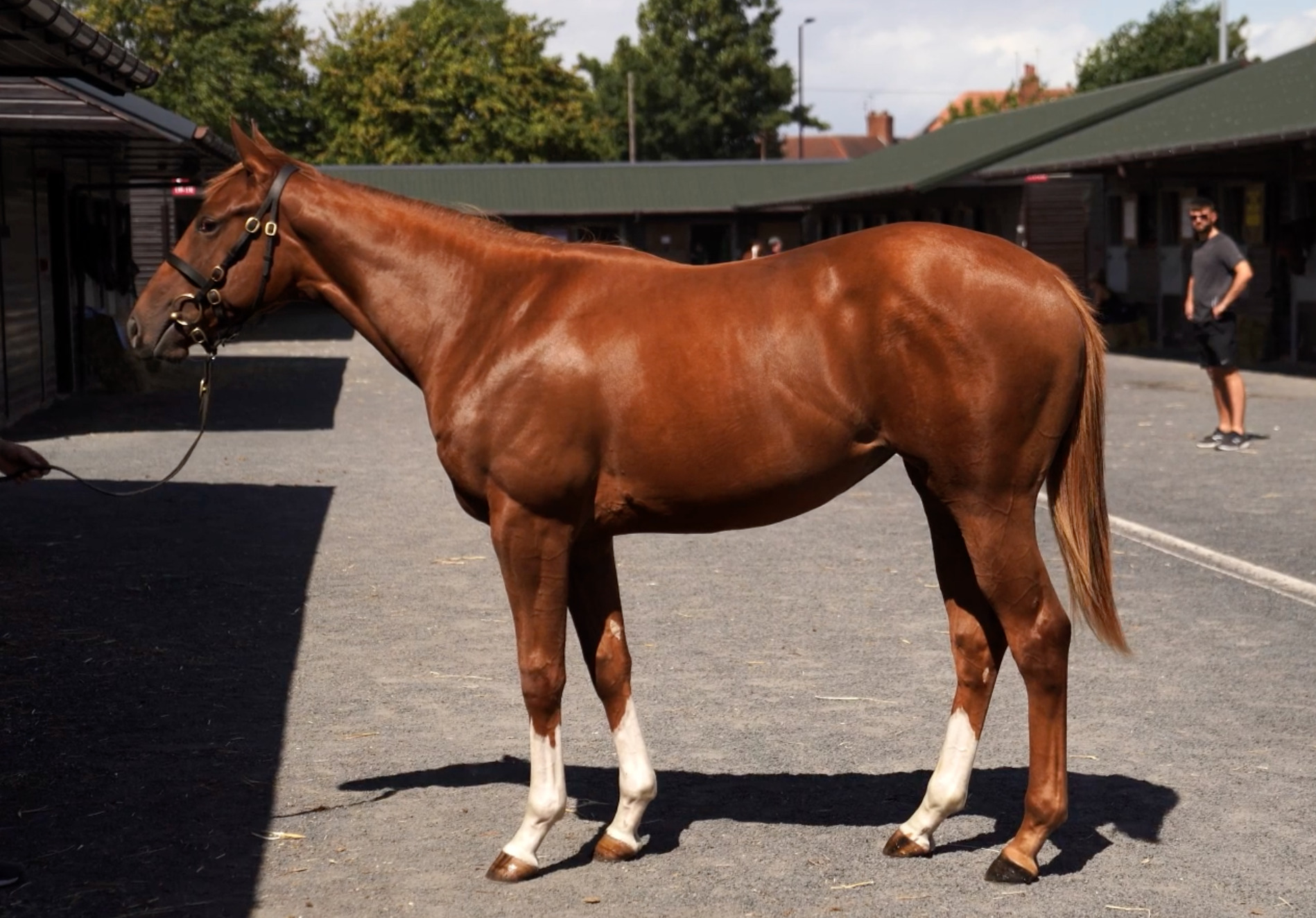 Tally-Ho were to the fore once again just moments later thanks to the sale of a homebred Galileo Gold colt who sold for £170,000 to Richard Spencer. A strong individual who came highly regarded by his breeders, much of his appeal was nevertheless fuelled by an almighty update courtesy of his two-year-old half-sister The Platinum Queen, who ran an excellent race when second in last week’s Nunthorpe Stakes at York.

The pair are out of Thrilled, a daughter of Kodiac sold by the farm for 460,000gns as a yearling. And once her racing career was over, they snapped her back up for €15,000 to maintain a 20-year association with the family.

“He’s class,” said Tally-Ho’s Roger O’Callaghan. “I’d be very surprised if he doesn’t do well, just a class horse. The filly was lovely too with a great temperament.”

He added: “It’s great to see the sale like this. This is what Donny should be like and it’s a credit to everyone behind it”

Fresh from a strong day of trade on Tuesday, the sale got off to a swift start on Wednesday thanks to the fourth lot into the ring, a daughter of first-crop sire sensation Havana Grey from Whitsbury Manor Stud who realised £230,000 to Jake Warren.

Shock tactics were employed by Nick Bradley, who went as far as to throw in an opening bid of £100,000. However, that failed to deter the heavy hitters, notably Richard Hannon, standing in the gate with Ross Doyle, and Jake Warren, standing at the top of the ring. Warren would not be denied, ultimately coming out on top at a new sale high of £230,000.

“She’s for Sheikh Isa and will be going to Clive Cox,” said Warren. “We had a real short list and were underbidder on the New Bay yesterday, so we thought we’d give it a real go today. She’s an absolute cracker of a filly and the mare has been incredible really – she’s four from four and two of them are high-class horses.”

The filly represents the essence of Whitsbury Manor as a daughter of multiple winner Showstoppa, a daughter of the stud’s stalwart Showcasing whose four winners include this year’s Sandy Lane Stakes winner El Caballo and Italian Listed scorer Avengers Queen. In turn, she is a half-sister to another high-class Whitsbury Manor-bred in Temple Meads.

Fireworks early at Doncaster as the 4th lot into the ring is bought by @JakeJWarren for £230,000 💥

The Havana Grey filly from @WhitsburyManor is a half-sister to G2 scorer El Caballo 🚀 pic.twitter.com/K4tdl8D43z

“She’s very well balanced, a real two-year-old type with great action,” said Warren of the powerful grey, who bore a strong resemblance to her sire. “It’s incredible what Havana Grey is doing and Whitsbury have done an amazing job with him. Two-year-old speed is the programme at Whitsbury, they’re very good at it – they’ve done a great job with Havana Grey and Showcasing, and they both appear in this filly’s pedigree.”

Such has been the relentless march of Havana Grey this season that it will take a seismic shift in the standings for him not to be Europe’s leading first-crop sire. Only this week he fired in his 30th winner and as such, has been hugely popular at this week’s sale. Further helping matters is the fact that his stock are winning widespread praise for their constitutions and straightforward natures, all of which bodes well for the future. Indeed, he wound up with an average of £54,789, good work off a 2020 fee of £6,500.

Trainer Richard Hughes was another to enjoy a particularly productive sale as the purchaser of no fewer than 12 lots led by a Frankel colt bought out of the Highclere Stud draft for £200,000.

The sole lot catalogued by Frankel, and a sharp sort to go with it, the colt was bred by Keswick family’s Rockcliffe Stud out of triple winner Tai Hang Dragon. In turn, she is a daughter of Tamayuz, meaning that this colt is inbred to Allegretta, and a half-sister to Grade 3 winner Pasar Silbano, herself dam of Australian Group 2 winner Zousain.

“It’s incredible to get a Frankel into the yard, so I’m delighted,” said Hughes, who was signing on behalf of an undisclosed owner. “I bought one by him out of the horses in training sale but this is the first one I’ve bought as a yearling, and I’m really pleased to get him. He was well placed in this sale but he’s big enough and he certainly didn’t look out of place here. He’s a lovely animal bred by the Keswick’s and it’s a family I know well.”

This sale, meanwhile, will likely live fondly in the memory for a number of pinhookers, particularly Guy O’Callaghan of Grangemore Stud whose Dark Angel colt blossomed from a 40,000gns Tattersalls December foal into a £200,000 yearling.

The colt, a half-brother to the Group 3-placed Kocna out of the Hawk Wing mare Star Approval, was snapped up by Peter and ross Doyle on behalf of Richard Hannon, a trainer very familiar with the progeny of Dark Angel having saddled the likes of Estidkhaar and Yafta – both Doncaster graduates – to Group race success.

“We always support our stallions, especially at the foal sales, and it’s great when the horses come back and make a profit,” said O’Callaghan, whose family run Yeomanstown Stud. “I can’t understand why this colt missed at last year’s sales but that was my good fortune I guess.

“He developed into a very big strong horse and he suited the sale because he’s so mature. I felt he took over the ring up there. I knew he was going down well with some big guys and I’m delighted a couple of them turned up and took each other on.”

He added: “It’s been a genuinely brilliant market. If you have the gear, you get well paid. The strength in depth has been phenomenal. Trade has been very buoyant.”

“He’s a lovely horse,” said Ross Doyle. “We’ve had loads of luck with Dark Angel before and this was a very forward, strong yearling with a great action and attitude.” 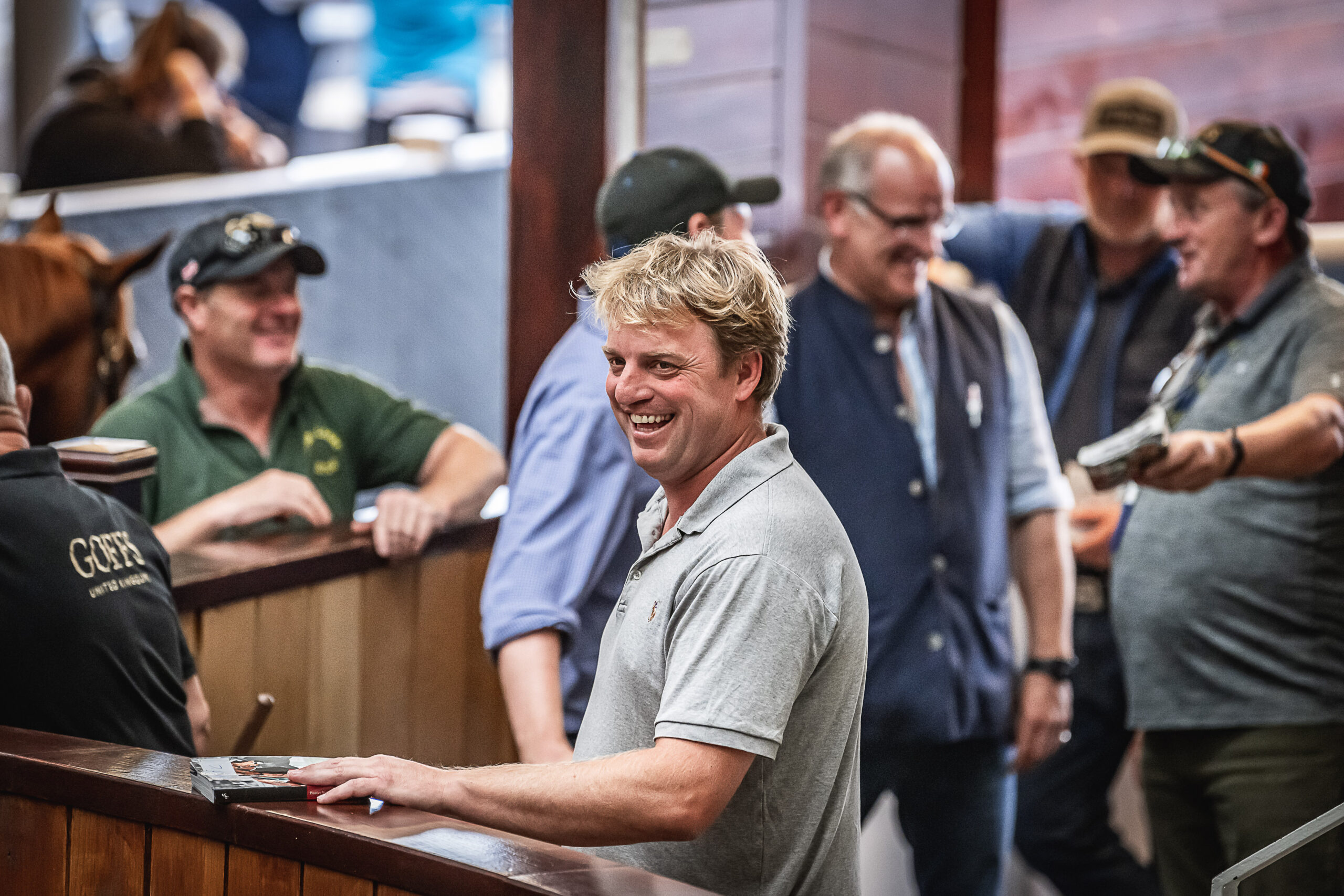 Roger O’Callaghan: “It’s great to see the sale like this” 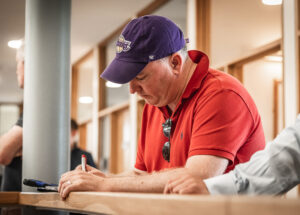