Despite the absence of both Sheikh Mohammed’s Godolphin and Sheikh Hamdan’s Shadwell Estate Company, trade held up well with 109 yearlings selling for an average of $373,211

A daughter of Tapit led the way led the way during a brisk opening session of the Keeneland September Sale in Lexington, Kentucky, on Sunday, selling for $1.25 million to Claiborne Farm on behalf of an undisclosed client.

Despite the absence of both Sheikh Mohammed’s Godolphin and Sheikh Hamdan’s Shadwell Estate Company, both of whom have long been major buying forces at this sale, trade held up well, with 109 yearlings selling for a total of $40,680,000, an average of $373,211 and a median of $330,000. The clearance rate was 64%.

With Book 1 dropping a session from last year to two days, direct session-to-session comparisons are an inaccurate reflection of the market.

If there was one bleak spot, it was the rash of late withdrawals which led to only 171 of the 224 yearlings catalogued heading to the ring. Having said that, these elite offerings tend to belong to high powered breeders with the means to race if their stock fails to meet market approval; thus, in this selective market, it could make more sense for some of those vendors to hang on to their produce.

“Just to have a sale met our expectations,” said Keeneland Director of Sales Operations Geoffrey Russell, who also noted that five horses were sold via the company’s new online bidding platform. “We’re very happy it’s September at Keeneland and we’re having a horse sale. To have competitive bidding at all levels of the market was very rewarding. The resiliency of this industry is unbelievable. For what everyone has been through, we appreciate all the buyers who are here and we wish them all success.”

The session-topping Tapit filly, who was consigned by Bluewater Sales, was bred by the China Horse Club out of the Grade 1 Alabama Stakes winner Embellish the Lace. She is the third foal out of the daughter of Super Saver, who is a half-sister to Grade 1 winner Afleet Express. 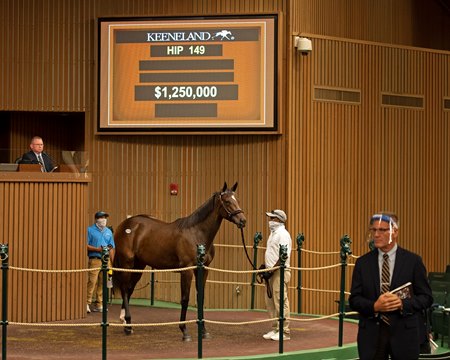 “This is for a Claiborne client,” Sams said. “He is going to try to buy a couple more fillies and build a broodmare band in the next few years. He wanted a Tapit filly. I saw her for the first time here a few days ago. [My first impression was that she is a] pretty, athletic filly. She is from a young mare from a family that could run. [With Tapit] it is a good cross.”

“You just never know what is going to happen even though she had all of the interest,” Bluewater owner Meg Levy told TVG. “She jumped through all the hoops. I am really, really thrilled that Claiborne’s client ended up getting her. She is such a queen. This filly did everything right the entire time.”

A year on from paying $8.2 million for the American Pharoah half-sister to Beholder and Into Mischief, Mandy Pope’s Whisper Hill Farm again zoned in on a well-bred filly to add to her illustrious band, going to $1.1 million for a Medaglia d’Oro half-sister to Grade 1 winner and emerging young sire Constitution. Bred by Bridlewood Farm and Don Alberto Corporation and sold through Denali Stud, the filly is out of the Albany Stakes third Baffled, also the dam of Godolphin’s Group 2 Superlative Stakes winner Boynton and Grade 3 winner Jacaranda.

“We are not looking for collectable [broodmares]; we are looking for a racehorse first,” said Todd Quast, who signed the ticket. “She obviously has great broodmare potential. She checked all the boxes for us. She is very athletic with a super, super shoulder like the Medaglia d’Oros have. We are happy to have her.” 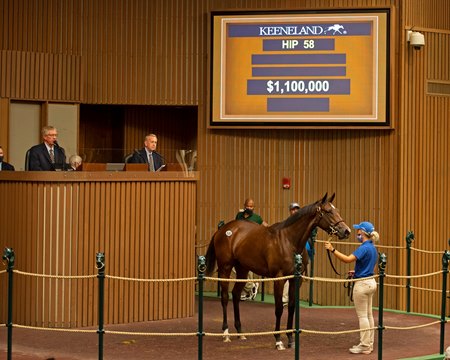 “This is for a client I started to buy a few horses for last year,” Ryan said. “He has been in racing awhile. This filly probably will go to Europe. She will start out there. Being a full sister to champion Air Force Blue, you would have to think she will love the turf. She looks to me like a filly who will run in the states on the dirt. She’s looks more to me like a dirt horse, but we know she will handle the grass.

“Hopefully she will do some good in Europe and we bring her back here later in her career.”

Ryan also said he “thought she was an exceptional physical when I saw her at Stone Farm on [Aug. 28]. She is a May foal and is very well grown for her age. Stone Farm raises good horses, and it is nice to buy from people who consistently raise good horses.”

It was also a particularly productive day for consignor Gainesway Farm, which was represented by a pair of million dollar yearlings in a daughter of Quality Road and a colt by Into Mischief.

The Quality Road filly was purchased by Donato Lanni as agent for owners Susan and Charles Chu, flanked by trainer Bob Baffert. Out of the Grade 3-placed Ghostzapper mare Beloveda, she is from the family of Grade 3 winners Voyagers Quest and Golden Mystery.

Larry Best’s OXO Equine paid $1 million for the son of Into Mischief out of Grade 2-placed Curlina to make him the session’s high-priced colt. Best, who has a well-known affinity for progeny of Spendthrift Farm’s sire-of-the-moment Into Mischief, said: “I was looking for a good colt – I seem to collect the fillies.”

Asked about the market, Best added: “Based on what I’ve heard and seen today, the market’s a little stronger than what I anticipated. There’s a lot of buyers here paying a lot of money for good horses. So that’s a good sign for the industry. I hope it continues.”

Coolmore’s MV Magnier, acting through agent Ben McElroy, made a notable strike, going to $800,000 for a Medaglia d’Oro filly out of the Grade 2-placed Fully Living. David Revders was also among the European-based purchasers, signing at $625,000 for a Curlin relation to Qatar Racing’s Kentucky Oaks heroine Shedaresthedevil from Hunter Valley Farm.

Juddmonte Farms, meanwhile, partnered with Bridlewood Farm and Winchell Thoroughbreds to pay $650,000 for a Medaglia d’Oro colt out of Grade 1 winner Dame Dorothy.

Book 1 of the Keeneland September Sale concludes on Monday. 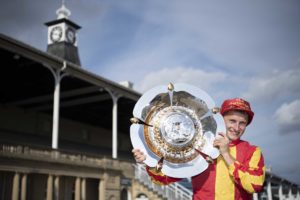 Up Next
Leger joy for Marquand and O’Brien