Joe Foley calls it “the champions’ field”. Looking at the race performances and pedigrees of the broodmares that inhabit a tiny part of Steve Parkin’s 300-acre stud farm in North Yorkshire, it’s easy to see why.

There’s Golden Reign, a half-sister to Golden Horn – purchased before her older sibling showcased his brilliance in the Derby and Prix de l’Arc de Triomphe – Agnes Stewart, winner of the Group 2 May Hill Stakes, Dandy Man’s half-sister by Dream Ahead, Group 1 Coronation Stakes heroine Maids Causeway… the list goes on.

Parkin, the boss of retail distribution and delivery firm Clipper Logistics, under which banner his horses run, talks about wanting to “create a legacy” at Branton Court.

The quality of bloodstock being rapidly assembled by the former butcher, lorry driver and coal miner at his fledgling breeding operation suggests he has every chance of making that happen.

Yet without the aforementioned Foley, better known as the man behind Ballyhane Stud in Ireland, it’s doubtful Parkin would still be involved in the sport at any level.

The pair met during the days of top sprinter Captain Rio, one of the first horses Parkin owned and later a stallion at Ballyhane.

I was losing fortunes in those days because there was no plan. I was just buying horses, going to the races and having a bit of fun

“Joe’s the closest thing in racing to a genius,” Parkin says. “Without him I’d have been gone years ago.

“I was losing fortunes in those days because there was no plan. I was just buying horses, going to the races and having a bit of fun.

“One day at Doncaster [sales], Joe took me to one side and said, ‘If you do not change what you are doing, you’ll be lost to racing.’ We got on famously from the start.

“The agents make a beeline for you at the sales. Anyone will sell you a horse but Joe took me under his wing. I put a lot of emphasis on his importance to my bloodstock business. I don’t know much about pedigrees – but I’m learning.”

He continues: “Anything I buy or breed goes to Ireland to be broken by Joe’s wife Jane at Ballyhane. She knows what we’re trying to achieve and when they are ready to go into training. They’re pre-trained in Ireland, which means our trainers can kick on and race them.”

Parkin fell in love with thoroughbreds as a boy. Growing up on a council estate in Leeds, both his father and grandfather loved a bet on the horses, with racing one of the few sports shown regularly on television. Well located for trips to York and Ripon, he promised himself he would buy a racehorse if he ever became successful.

Clipper Logistics, which is now a thriving £400 million company, started “by mistake” in 1992. At the time, Parkin was working in the fashion industry for a haulage company.

“I never set out to start my own business,” he relates. “I had worked my way up to number two in control of this firm. Then I had a fall-out with the owner and told him, stupidly, to stick his job.

I met a guy called Philip Green and worked with him as he grew his businesses. He became a mentor and a friend. He’s a hard man to work for – but there you go!

“In order to pay the mortgage I needed to hire a van and get on the road. I had built up a lot of contacts in fashion distribution in the north of England, so it was the natural thing to do.

“The company became successful and really grew on the back of two things. The first was some friends of mine in Huddersfield who owned the fashion chain Bonmarché – they gave me some breaks.

“Then I met a guy called Philip Green and worked with him as he grew his businesses. He became a mentor and a friend. He’s a hard man to work for – but there you go!”

The financial crisis of 2007-08 threatened to knock the wind out of Parkin’s sails – “we lost £30m of sales and £3.5m of profit in six weeks” – but around the same time he had noticed that internet shopping was taking off.

A contract with supermarket giant Asda, which was moving into the online market, took the company in a new direction, one that has seen Clipper Logistics become a leader in its field in managing retailers’ online proposition.

Parkin says: “If you order an item online from John Lewis there’s a 90% chance it will come out of one of our warehouses. We now have 46 warehouses throughout Europe.

“Online, returns and click-and-collect are the big growth areas. We’ve been at the forefront of the industry – and we keep evolving.”

Evolution is a key word at Clipper Logistics, used for a successful marketing campaign and even its in-house magazine. Parkin’s move into the breeding side was also a natural progression from his experiences as a racehorse owner.

He explains: “When I look at racing the winnings are paltry compared to the expense. So if there’s not much there in terms of prize-money, where’s all the cash going? It’s back in the supply chain; breeding and stallions.

“The inspiration for Branton Court actually came from a visit to Harry McCalmont’s stud at Norelands in County Kilkenny. I thought it was beautiful, absolute heaven, and I said to Joe I’d like to have something like it one day. But we were looking for about seven years before we found this place.

“I have a bespoke operation. We have 12 broodmares now – I think we’ll get to 25 and will always look to upgrade the stock.” 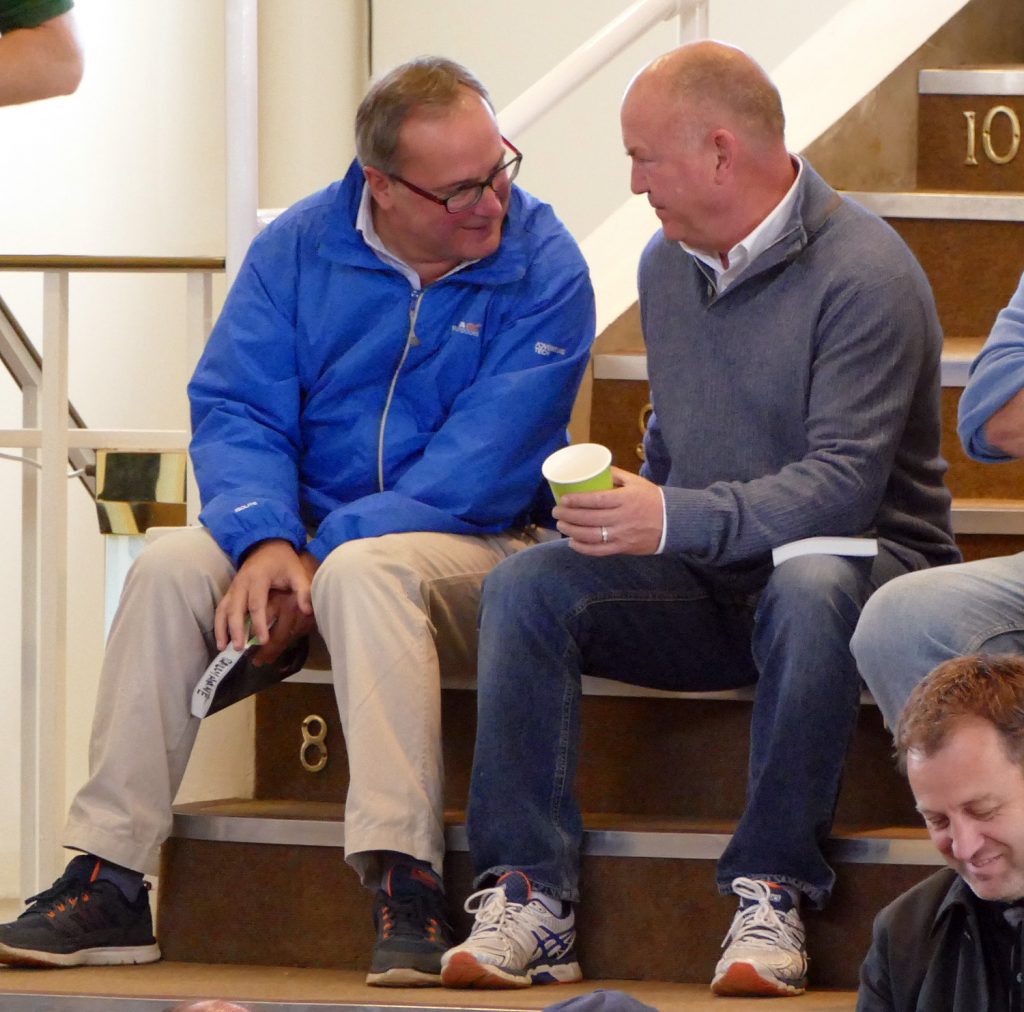 Parkin with Joe Foley, who he credits with the success of his racing and breeding operation

Parkin continues: “I have a five, ten, 20-year plan, as I do with all my businesses. I want to create a legacy, a pre-eminent breeding operation with the best families. From my farm to my silks, I want to create something special.

“I’ll be breeding to race primarily, though I will sell from time to time. Fortunately I don’t have to sell. But I’m not scared to take a profit.”

The figures in the ring for Parkin runners, both buying and selling, make for impressive reading. His Group 1 Cheveley Park winner Rosdhu Queen was bought for 65,000 guineas and sold for 2.1 million gns.

Main Desire and Fashion Queen, the fillies that gave their owner a superb Listed double at his favourite track York in May, were picked up for €40,000 and £27,000 respectively. Parkin has turned down private bids for both totalling £1 million.

How does the businessman in you square the cost of buying horses? You can’t. But that’s the beauty of the game. The highs are so high because the lows are so low

“I made £4m profit the year we sold Rosdhu Queen and Electrelane,” Parkin explains. “But then I also shared a €1.2m Galileo colt with Qatar Racing [named Transatlantic] that is now three – he hasn’t made it to the track yet.

“How does the businessman in you square the cost of buying horses? You can’t. But that’s the beauty of the game. The highs are so high because the lows are so low.

“I think one of my biggest attributes is accepting that you cannot change history. Just look forward and make sure you don’t make the same mistake again. Never look back.

“This is a passion for me. I have put the financial mechanism in place to keep the operation going for a number of years.

“The kids can’t sell it. In 100 years’ time I’d love it to be known as a Juddmonte, with pedigrees associated with Branton Court.

“I want to give my mares the best possible chance to do well, which is why we’re using stallions like Dubawi and Frankel. For me, it’s cutting down the odds.

“Rob Stapleton is my stud manager and he reports directly to Joe Foley. I speak to Joe more often than I speak to my wife!”

‘I love the buzz’

Parkin has owned a number of jumps horses, including Grade 1 winner Morning Assembly, and while he enjoys the winter sport – not surprisingly for someone who grew up admiring the likes of Sea Pigeon, Night Nurse and Monksfield – it is the Flat that really captivates this owner-breeder.

He says: “I enjoy two-year-old racing most of all. I love the buzz and unpredictability – they could be anything. When you have a 90-rated gelding it might drop to 88 or get to 92. However the two-year-olds could be future Classic winners.

“With the National Hunt horses I don’t look at future value. There’s a different mentality and I enjoy the camaraderie. But in truth I prefer the faster horses. 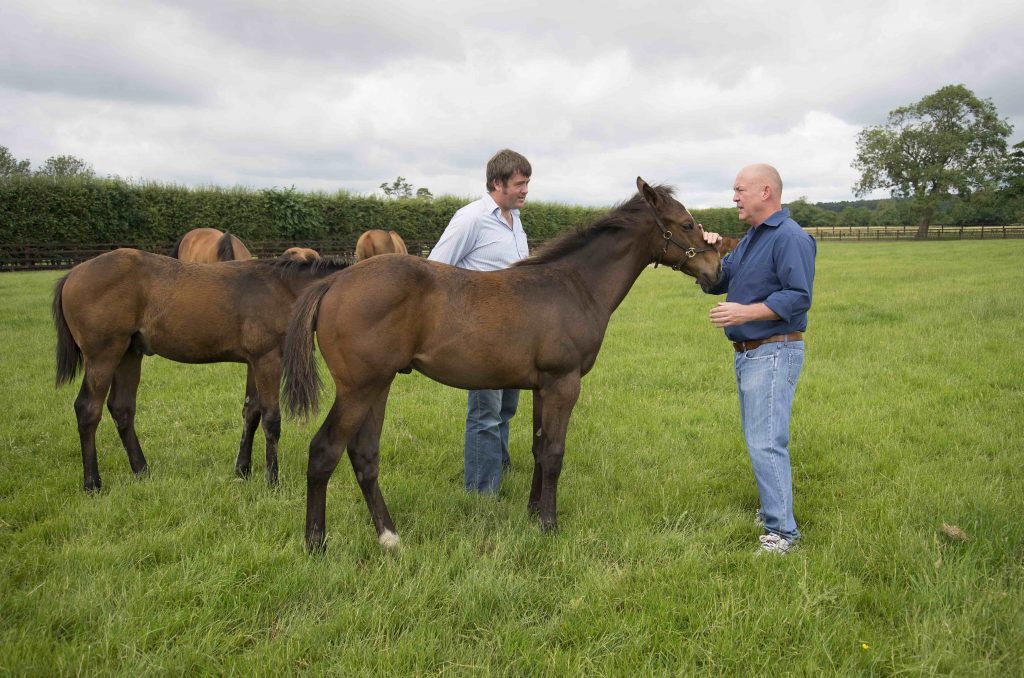 Currently he is awaiting his first homebred winner from Branton Court. A two-year-old daughter of Dubawi out of Beyond Desire – “she survived a broken pelvis and a bout of colic that nearly killed her to win a Group 3” – could be the first to provide that honour.

Until then he is happy just to enjoy his horses at the home he shares with wife Joanne and children Fabienne 15, Delphine 13, Henri 11 and Severine 10, all of whom have ridden, with Fabienne described as “besotted” with horses.

“Now I have the farm, I think they are just the most majestic animals,” Parkin says. “My wife and I sit outside on an evening with a glass of wine and just watch them. You see the foals playing with each other, the mares running round. We are just fascinated with them.

“My favourite mare, and the first to give birth on the farm, was Beyond Desire in April. I got up at 2am and watched her produce her foal. It was like watching one of your children being born. To see the foal now is fascinating. But the mare hates me – she always tries to attack me.” 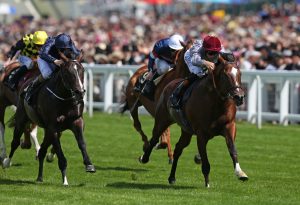 Up Next
Great value can be found anywhere