Festival first for Greatrex and Sheehan

The son of Westerner had had a wind operation since his previous outing in the Cleeve Hurdle at Cheltenham in January and Greatrex went into today’s race with guarded optimism.

Sheehan, who like the winning trainer was enjoying his first Festival success, set off in front aboard Cole Harden and held off all comers with an impressive display that saw him finish three and a quarter lengths clear of Saphir Du Rheu.

“I believed in the horse, but I was struggling with him early in the season,” said Greatrex, a former journeyman jump jockey who is having his best-ever season at his new base at the historic Uplands Stables.

“When he came back in I was having trouble with his wind, and I sent him away to be tested, and he then went and won at Wetherby and won well. So I thought the people who were looking at his wind didn’t know what they were on about.

“After that I struggled with him and I thought we’d go to the Cleeve and we’d see, and he wasn’t right. So we had the operation done. We knew he was spot-on but I’m small. I’ve got 75 horses in the yard and we’re breaking through.

“It makes a big difference that Gavin knows him, and I told him to look after this horse, he’s the real deal. We’ve just won a Grade 1 and beat the best. That’s why we’re here.

“Coming down the hill, I thought, they’re really going to have to do it because he’s a free-wheeler and he’s so tough. He wouldn’t have stopped, he’s fit. I’ve never had him better, but you just don’t believe you are going to win a race like this.”

Cole Harden, who races in the colours of Jill and Robin Eynon, was bought privately by Greatrex’s bloodstock agent wife Tessa after being led out unsold at £30,000 at Brightwells’ April Sale at Cheltenham in 2013.

He also brought the biggest career success for Sheehan, last season’s champion conditional, and the Irishman was delighted to score on the 14/1 chance.

“It was amazing,” said Sheehan. ”That is what dreams are made of. He jumped off well but I had to get at him just to get my way so I could get in front. He jumped brilliantly and did everything right. He was full of running and I didn’t know whether to squeeze on earlier as he had so much running in him. He’s done everything right but I was just waiting for a horse to fly past me and beat me.

“It’s very special, very, very special. Warren gave me the lecture beforehand and he was psyching me up. He was making sure that they weren’t going to go and make it a war but, with fractions, you can’t get them right all of the time but you can only feel what the horse is giving.

“He’s got so much spark. He hasn’t really given me that feel all season, even when he won at Wetherby, I was just coming into today thinking we were a big player.

“This is definitely my dream come true. I had my head down going for home and I didn’t know where the good horses were but I wasn’t going to look round. It means a lot to me, to Warren and everyone at home. It’s what dreams are made of.” 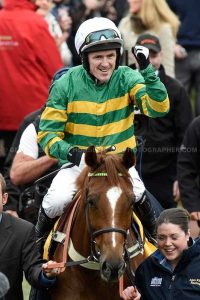 Up Next
McCoy given hero's welcome