Background: Tough two-mile hurdler has taken his form to new heights this season, winning three in a row, including the Listed Intermediate Hurdle at Newbury, before chasing home Tritonic in the Grade 3 Betfair Exchange Trophy at Ascot in December

My partner Tom Stayt and I went to Doncaster Sales looking for three-year-old gelding but the ones we liked were much too expensive. Tom saw an unraced four-year-old filly he liked, Vinomore, and we got her for £3,000. She won a  bumper and a novice hurdle but she wasn’t sound and she couldn’t get her form back and so we bred from her. Onemorefortheroad is  her first foal. He went to the sales as a foal but thankfully he didn’t make his reserve. He now races for a syndicate of 12 of our friends.

We have to pinch ourselves – it’s been like a dream. Unfortunately, because of Covid restrictions I missed out on being there for any of his three wins last season, but we had a big party in the summer to celebrate what he’d done, and just in case it didn’t happen again.

In fact he’s taken it to another level this season and it’s just been incredible. He’s won another three and he finished second to Tritonic in the valuable  Betfair Exchange Handicap at Ascot, which I found quite overwhelming as he was flat out all of the way and would have done well to have finished in mid-division.

I take each race as it comes and I’m not one for targets. I’m not desperate for him to run at Cheltenham yet, as he’s still quite immature in his head, and the Betfair Hurdle, which Neil [King] has mentioned, is a bit of a cavalry charge and the ground will probably be too soft.

We quite fancy the Scottish Champion Hurdle, as it’s more likely to be decent ground and we might miss some of the big guns. A couple of us already wear leggings in the syndicate’s red and yellow to the races, and some of the boys are talking about getting kilts made in the same colours, so it would be a fun trip for us all.

Neil is busy, like all trainers, but he always accommodates us if he can when we want to come up on the gallops, and we get a great breakfast too! He’s very honest, and he has really good staff, which is so important, as well as stunning facilities, with plenty of variety.

He has about 35 horses, which is a good number for such a perfectionist, and he and Onemorefortheroad have had the opportunity to get to know each other.

I just have the one horse in training, but I do have his yearling full brother who may one day replace him. I’m not looking to get involved in a different syndicate or racing club, or to buy another for the same syndicate at the sales, because I’ve been very spoiled and I think I’d have a job to match the experience I’ve had with Onemorefortheroad. Prize-money isn’t an issue, because I didn’t expect to win any with him in the first place! The main issue I have as an owner is with tickets, which can be very difficult with a syndicate. Huntingdon are absolutely brilliant, but it varies from track to track and my local course, where he also won, was awful. 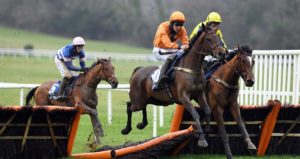