Charlie Fellowes spoke of the significance of Prince Of Arran’s gutsy victory in the Group 3 Geelong Cup on Wednesday as the gelding bids to gain a starting berth in the Melbourne Cup on November 5.

The six-year-old’s second in the Group 2 Herbert Power Stakes on October 12 had left him in 37th spot for ‘the race that stops a nation’.

However, victory over the Willie Mullins-trained True Self in the 1m4f contest could see chief handicapper Greg Carpenter awarding a half-kilo penalty, which should take Prince Of Arran into the final Cup field, as he bids to better his fine third in last year’s renewal.

Fellowes said: “It’s wonderful to win such a great race but the relief at hopefully not having to run three days before the Melbourne Cup to get in is far more significant. Hopefully, now we can put our feet up and watch everyone else fighting out for those final places.

“Prince Of Arran only just held on. Willies Mullins’ horse ran an absolute blinder but hopefully that’s payback for when Willie beat me at Royal Ascot a couple of years ago!

“He’s got to stay in one piece between now and then. They’re horses and they have a brilliant knack of causing themselves harm when you least want it. We’ve got to wrap him up in cotton wool until then.”

Playing another part in Melbourne’s Spring Carnival is extremely rewarding for Fellowes, who will fly out to join Prince Of Arran in Australia on Tuesday, and he said: “This is why I train racehorses, to be a part of these amazing festivals around the world.

“The Spring Carnival is absolutely fantastic and it’s a brilliant advert for racing.”

Fellowes is having his best ever year as a trainer since taking out his licence in 2014, having saddled 31 domestic winners in 2019, including Listed Silver Tankard Stakes scorer King Carney. He also moved yards, setting up at the historic Bedford House Stables on Newmarket’s Bury Road.

Reflecting on his achievements, Fellowes said: “It’s been a very important year as we moved to this beautiful new yard. But with moving to a yard of this magnitude and history comes a huge amount of pressure.

“My team have stepped up again, we have increased the number of winners and the amount of prize-money we have won. It’s been a brilliant year, but the pressure is not off; we have to keep on going and do it all again next year.”

In our October issue, Tim Richards caught up with Charlie Fellowes where he discussed the whip, moving to Bedford House and more. You can read the fascinating piece here 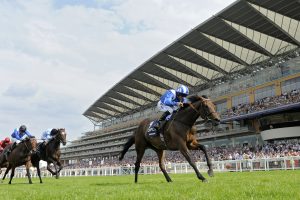