Favourite Rocco out of Grand National

Trainer Jonjo O’Neill has revealed that Minella Rocco, who shot to the head of the ante-post market for the Randox Health Grand National after finishing second in the Cheltenham Gold Cup, will now miss the race on April 8.

The Gloucestershire-handler never won the four mile and three furlong prize in the saddle. Yet he landed his first victory in it as a trainer with Don’t Push It in 2010, who was giving Sir Anthony McCoy his breakthrough win in the race.

Along with that day’s winning owner JP McManus, the decision to withdraw Minella Rocco has said to have been taken with a long-term view.

McManus himself enjoyed notching his 50th Cheltenham Festival winner last week which included a one-two in the Champion Hurdle on day one with Buveur D’Air and My Tent Or Yours.

O’Neill said on twitter yesterday: “Minella Rocco has been taken out of the Grand National this morning. He’s absolutely fine and we’ll aim him at the Gold Cup again next year.”

A son of Shirocco, the seven-year-old posted his best effort to date last week in the Gold Cup. After being held up off the pace under Noel Fehily, he stayed on strongly up the hill to reduce the deficit to just over two lengths on the winner Sizing John at the line.

Frank Berry, JP McManus’ Racing Manager, said: “He’s finished for the year now he won’t be going to Punchestown either.

“He’s only seven and he had a hard race in the Gold Cup. It will take him a while to get over it so we felt we’d just look to next year with him.”

Jackdaws Castle have also taken out Shutthefrontdoor, another former favourite of the race, as he heads for the Irish equivalent next month. However, they have confirmed that More Of That, who finished four places behind his stable mate in the Gold Cup, will compete in next month’s showpiece event.

The betting for the race is now headed by the David Pipe-trained Vieux Lion Rouge with last year’s runner up The Last Samuri next best at 14/1. 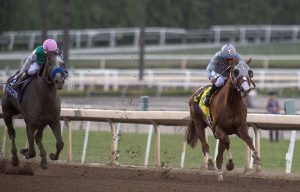 Up Next
Arrogate primed for World Cup bid