John Halley is seen regularly in the winner’s enclosure after top Flat races in his role as vet for the Coolmore and Ballydoyle operations, but he enjoyed a turn at Cheltenham on Friday as winning trainer after Outlaw Pete won the Glenfarclas Cross-Country Chase.

The victory was made even sweeter for Halley as his student son Josh, an amateur rider, was aboard the eight-year-old son of Witness Box who races in the colours of JP McManus.

The winning owner enjoyed a double at Cheltenham, with At Fishers Cross taking the next race on the card, the Citipost Handicap Hurdle, while Even If brought up a treble on the day with victory in the bumper at Bangor.

Outlaw Pete was winning for the fourth time under rules, his most recent success coming at last season’s Punchestown Festival in the Irish Field Chase when he was also partnered by Halley junior. The gelding, who was formerly trained by Enda Bolger, has also won five point-to-points in Ireland and is now co-favourite for the cross-country chase at the Cheltenham Festival in March.

His sire Witness Box, now 25, stands at Old Road Stud in Ireland and is best known as the sire of 16-time winner Take The Stand, who was runner-up to Kicking King in the Cheltenham Gold Cup of 2005. 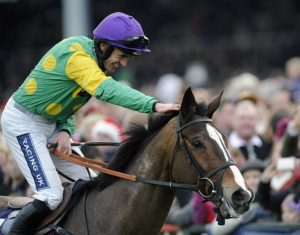 Up Next
New career beckons for Kauto Star