Like many of us, Jack Cantillon was waiting earlier in the year in anticipation for June 1, the day that racing was finally able to return following it’s Covid-enforced hiatus.

Just six days later at Newmarket, the Rowley Mile played host to a typically competitive 2,000 Guineas card and while Guineas winner Kameko stole the headlines, there was also an exceptional display of speed in the form of Far Above’s victory in the Palace House Stakes.

The superlatives flowed but sadly it later emerged that he had suffered a career-ending injury, and he was subsequently acquired by Cantillon to stand under his Bloodstock.Racing banner in association with Micheal Orlandi of Compas Stallions at Starfield Stud in County Westmeath. His former owner, Sheikh Rashid Dalmook al Maktoum, has also retained an interest.

“The most striking thing for me on the day was watching him jump out of the stalls, missing the kick, but still having the pace to go past everything on the bridle and lead,” says Cantillon. “To do that in a stallion-making race like the Palace House made him a serious stallion prospect. He screamed potential Group 1 winner.

“When we announced that we were standing him, there was a little bit of trepidation because there is a belief in the horse and you hope that others will come with you on the journey. And we’re delighted with the response.

“Anyone who has been able to come to see him has been bowled over by him. We also had a limited number of breeding rights available and they sold out in two days to some of the best breeders in Europe. That has been a brilliant vote of confidence, for which we’re very thankful.” 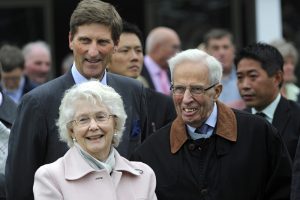 Up Next
Death of Cheveley Park Stud joint-owner David Thompson