By The Owner Breeder staff 09 September 2012

James Fanshawe has enjoyed many great triumphs since taking out his first trainer’s license in 1990 following stints as assistant to both Sir Michael Stoute and the late David Nicholson. The years when he fails to land a Group 1 victory seem to be rare, and he landed his latest top-level strike courtesy of the victory in the Betfred Sprint Cup of his stable star Society Rock.

Society Rock on Newmarket Heath behind another Fansahwe star, the sidelined Deacon Blues

A tough little near-black five-year-old son of Rock Of Gibraltar, Society Rock, who is owned by the popular Exning-based octogenarian Simon Gibson, has always been very fast. His record in the Golden Jubilee Stakes proves this: he finished second to Starspangledbanner in the race in 2010, won it last year and then posted a remarkable performance in this year’s edition, crossing the line only two lengths adrift of the winner Black Caviar despite having forfeited considerably more ground than that by playing up in the stalls and consequently missing the break.

As that run suggests, Society Rock’s Achilles heel has proved to be his aversion to the stalls. However, the patience of Fanshawe and his staff – helped by Newmarket’s stalls guru Steve ‘Yarmy’ Dyble, who is regularly seen leading Frankel into the stalls before the champion’s big wins – has proved more than a match for Society Rock’s hang-ups. Blindfolded and loaded late at Haydock, the sprinter jumped on level terms with his rivals and duly romped home under Kieren Fallon.

Society Rock’s big win completed a particularly memorable afternoon for the Pegasus Stables trainer. An hour previously at Kempton, the veteran Dandino, who only joined Fanshawe’s string this year following a long and successful stint with James Given and a short and abortive attempt at a National Hunt career in the hands of Nicky Henderson, recorded his first win since taking the Jockey Club Stakes (for Given) in April 2011.

Dandino’s return to the winner’s enclosure came in style as the Elite Racing Club-owned and –bred five-year-old won the Group 3 September Stakes under a typically sound ride from Jim Crowley. 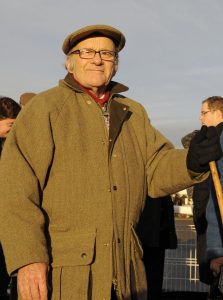 Up Next
Lord Oaksey dies at 83