There can be no doubt as to the identity of next year’s most exciting first-season sire. The hype surrounding Frankel will run and run, and rightly so, but it would be folly for breeders, particularly owner/breeders, to overlook another new recruit to the stallion ranks who also began his life within the Juddmonte fold.

Step forward Famous Name. In this era when few bat an eyelid at the premature retirement to stud of thoroughbreds at the end of their two-year-old seasons, how refreshing it is to have such an exciting stallion prospect whose fee is likely to be within range of most breeders.

The son of Dansili, who will be eight when he covers his first mares at his new home, the Irish National Stud, has raced for six consecutive seasons, earning black type in each of those years. Only one of his 21 victories did not come at stakes level and to his Group 2, 12 Group 3s and seven Listed successes can be added seven Group 1 places.

Famous Name came agonisingly close to Classic glory when being beaten by just a head by Vision d’Etat in the Prix du Jockey-Club but he was arguably at his best at home in Ireland, making Leopardstown his own with 13 victories at the track, including, fittingly, his final start in the Listed Trigo Stakes – a race he also won in 2008 and 2010.

If there was sadness in seeing this great flagbearer of Dermot Weld’s stable make his swansong on Saturday, there was some compensation in the promising win on the same card of his two-year-old full-sister Big Break, who won the Group 3 Killavullan Stakes on just her third start.

Their dam Fame At Last is a daughter of Juddmonte’s Derby winner Quest For Fame and all seven of her offspring to race so far have won, including four-year-old filly Zaminast, who won the Trigo Stakes last year.

With Frankel and Bated Breath, another son of Dansili, already added to the Juddmonte stallion roster for next season, it’s understandable that there’s no room at Banstead Manor for Famous Name, but England’s loss is surely Ireland’s gain. A more admirable campaigner it’s hard to imagine and if soundness and durability count for anything in the reckoning of modern-day breeders then Famous Name will be very well patronised. He deserves to be. 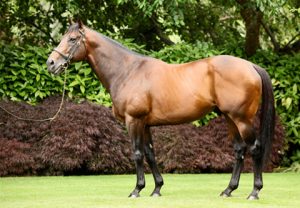 Up Next
International entries for breeze-up