When the Listed-placed mare Sugar Mill was purchased for €110,000 at Arqana’s December Sale in 2006, so began a path towards the Classics which every owner-breeder hopes to tread.

The daughter of Polar Falcon was sold in foal to Sinndar and became the property of ROA President Rachel Hood, whose husband John Gosden would go on to train the resultant foal, Gertrude Bell.

In 2010, Gertrude Bell won the Cheshire Oaks to earn her place in the line-up for the Investec Oaks, in which she finished fourth to Snow Fairy. She would later add victory in the Group 2 Lancashire Oaks to her résumé.

Three years later it is the turn of her half-sister, Gertrude Versed, to keep the Epsom dream alive. Having won her maiden in January, the diminutive daughter of Manduro came close to emulating her sibling when second to Banoffee in the Cheshire Oaks and she heads to the Investec Oaks on Friday, in which she will face ten rivals.

“Gertrude Versed has been fine since the Cheshire Oaks. She is entitled to take her chance but her form is obviously a long way off some of the better ones in the race,” said Hood.

“We are hoping she can run well and her half-sister Gertrude Bell ran very well to finish fourth a few years ago. It is very exciting just to have bred a filly who is running in the race.”

John Gosden added: “Gertrude Versed has been in good form since Chester and I think the winner of that race was rightly supplemented for the Oaks – it is not a decision they would have made lightly. It looks to be solid form.

“There are some high-quality fillies in the race on Friday and I think the track should be no problem for our filly – there is only one way to find out and that is by running.”

Between the two fillies in the family pecking order comes five-year-old gelding Dick Doughtywylie, by Gosden’s former stable star Oasis Dream, who also races for his breeder. In addition to Dick Doughtywylie’s two victories under rules, he had the distinction of carrying West Suffolk MP Matt Hancock to victory in a charity race at Newmarket last summer. 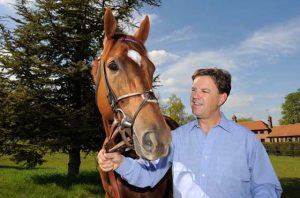 Up Next
Emotional return