Sun sparkling on the Cotswolds, dry paddocks in January, and three new stallions with which to tempt breeders – no wonder the Varey family of Batsford Stud are feeling chipper.

Alan, Anna, their son Tim and his partner Linzi, are blessed to live and work in this picturesque corner of Gloucestershire, and while the busy season is about to swamp them with foalings and coverings, and all the extra work that entails, you sense they would not swap it for an easier life in a lesser setting.

Alan says: “I get up in the morning and think, ‘How lucky am I to live here?’, and that sense is even more acute when I visit different parts of Britain. I’m from the north of England, but I have no wish to go back and leave this special place.

“I loved my time at Hillwood Stud, which was run then by John and Joy Hobby who were very good to us and really set us going, and we have been very lucky here with Lord and Lady Dulverton [owners of the Batsford Estate], who have also been very supportive.”

Studs’ fortunes wax and wane, but Batsford has not been in a better position to draw in clients. During a flourishing of fresh arrivals, the Vareys achieved quite a coup in convincing Nick and Jackie Cornwell that Batsford Stud was the place to send their St Leger winner and Gold Cup third Harbour Law for his first covering season.

In recent months they have also received the former Whitsbury Stud sire Swiss Spirit plus the dual Guineas winner Cockney Rebel, who has returned to Britain after five years in France.

I get up in the morning and think, ‘How lucky am I to live here?’

Add in their established trio of Haafhd, Native Ruler and Passing Glance, and the Vareys have a roster of variety, one that has certainly raised the stud’s profile.

Tim says: “There has been a terrific uptake in social media interest in Batsford Stud as the announcements of the new stallions were made.”

Was it a grand plan to stand six stallions, including three new recruits in one go? Anna says: “It wasn’t planned – we were approached. Whenever we have a business decision we sit down as a family and discuss it.”

Tim says: “We always ask ourselves, can we do this stallion justice? We might be offered a stallion that deserves 40 or 50 mares straight off, before any outside mares come in, but we are a family business and have to be realistic – we don’t have 40 or 50 mares of our own.”

They do have land, and more of it since acquiring a lease on part of the Cotswold Stud that was owned by the late Mary Hambro.

With paddocks, stables and barns at that farm, just a short drive from Batsford, and now with some 155 acres on which to graze mares and young stock, they are ready for the additional business that will come with their burgeoning stallion roster.

Their stud is worth a visit, as is any venue in the Cotswolds, one of England’s bucolic crown jewels.

Which other stud can boast of stables with glazed bricks and Victorian heating, a legacy of the time when the Batsford Estate was home to Bertram Freeman-Mitford, grandfather of the famous Mitford sisters.

Carriages were the mode of transport, and the horses that pulled them were treated like rare- model Ferraris. Walk through those stables and you sense the ghosts of grooms in flat caps and brown boots, busily strapping or polishing harness. They must take quiet pride in their enduring legacy.

Turn the clock back and Alan and Anna Varey stood as much chance of working at NASA as Batsford.

He says: “There were no horses in my background – a donkey ride on Blackpool beach was as close as I got to them until, inspired by watching racing on the television, I left school and gained a job in racing.

“I went on to ride professionally, but couldn’t make it pay, so I took a job with a printing company – by working shifts I was able to run a livery yard on the side, and it grew from there.”

Anna was working as a consultant for an American firm, advising blue- chip businesses on relocating key staff –definitely closer to NASA than Batsford – but when Alan had a bad fall while schooling a point-to-pointer, just before they were due to sell two stores at Doncaster, Anna had to roll her sleeves up and learn how to lunge.

She says: “We decided to make the horse business our full-time occupation, and Tim was keen to get into it, so we packed him off to Hartpury College to study Equine Business Management.”

From there Tim entered racing, working for several trainers, until his parents moved to Batsford in 2001 and he returned home.

We decided to make the horse business our full-time occupation

Anna says: “Just after we moved here we were approached by Robin Dickin, who had trained Kadastrof. He had been standing in Ireland, but the owners wanted him back in Britain, and he became our first stallion.

“Umistim arrived next, then Pasternak, and he was followed by Erhaab, the Derby winner, who is now 28 and still living here.”

One year ago the Vareys had four sires, the roster including the Deep Impact stallion Danon Ballade, but an offer from Japan was too good to refuse and he returned to the land of his birth. Into the breach steps Classic winner Harbour Law.

Anna says: “Nick Cornwell visited the stud and later sent us Harbour Law. He will be marketed as a dual-purpose sire, but we see that as a mark of versatility.” 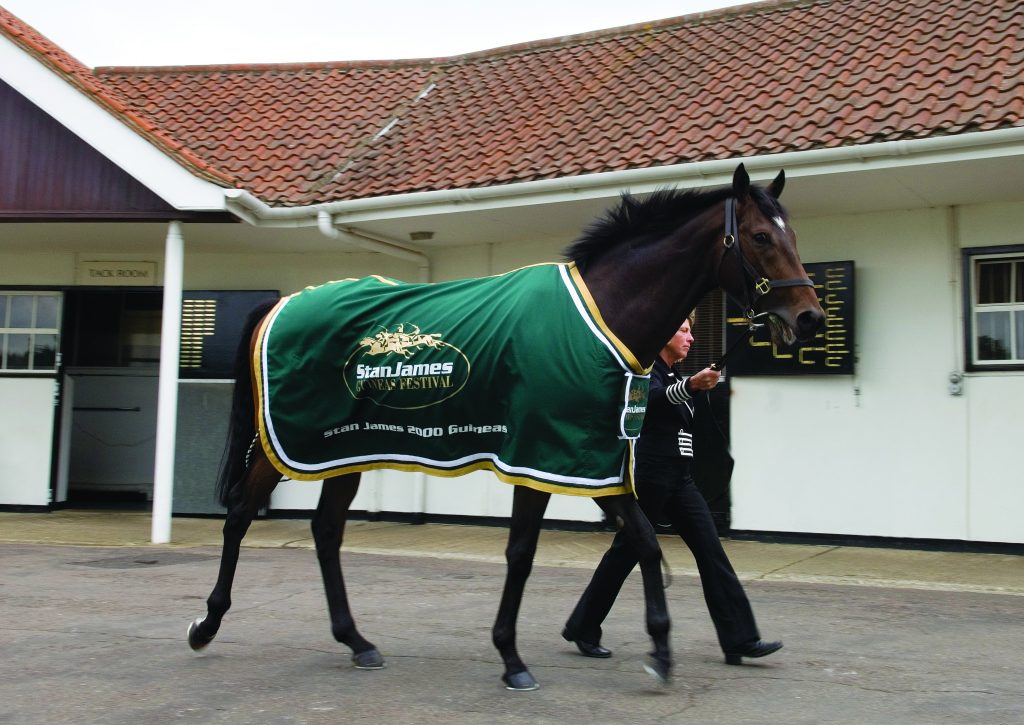 Cockney Rebel began his stallion career at the National Stud in Newmarket. Now he is on Batsford Stud’s roster – Photo: George Selwyn

Tim says: “He has the size and conformation to cover Flat and jump mares and, while most St Leger winners go on to be National Hunt stallions, if he is given the right mares he will get Flat winners too. We are going to push him and make sure he works – all the horses here have to work.

“Nick and Jackie have a band of Flat broodmares, and many of those will be coming here to visit Harbour Law, and by having Flat mares he will get success earlier in his career.

“We will be sending him some jump mares, and we have permanent boarding mares who will visit him.”

The Vareys do not own any of the stallions who stand under their banner, so they must have impressed the sextet’s owners.

They include the Harris family of Lordship Stud, who sent them Native Ruler in 2015, and have followed up with the former Whitsbury Stud stallion Swiss Spirit.

A son of Invincible Spirit, his first crop are now four-year-olds, and, while he has yet to sire a black-type winner, he is still young and has plenty of stock on the ground – if a stakes performer or two emerges, Batsford will be in a lovely position.

Alan says: “He had two winners in the first week of January and there are plenty more young horses to come through.

“We’ve always loved sprinters and an opportunity to stand him here was one we couldn’t turn down – all he needs is that black-type winner.”

Cockney Rebel opened his stallion career at the National Stud, spent six years there and then five in France.

We’ve not been unrealistic with our plans, therefore it’s not a make or break

Alan says: “We met Tim Lane [manager at the National Stud] at a function and said we would like another stallion, and later he rang and said Phil [Cunningham] wanted the horse to come back to Britain and he had advised him to send him to us.

“He’s had black-type winners on the Flat and over jumps and will stand as a dual-purpose sire. There should be some winners emerging in France soon.”

The Vareys may not have the financial muscle enjoyed by some stud owners, but their business has a niche which offers stallions for the middle market while looking after clients, many long-standing, who board mares at Batsford, breed to race, and take advice on matings from Alan and Tim.

Have they come up with a figure for the number of mares they need to attract to make six stallions viable? Tim says:

“We aren’t thinking of a specific number of mares, because we are in the lucky position of having enough mares that are permanently boarding to support what we do. We’ve not been unrealistic with our plans, therefore it’s not a make or break.

“We would love to be in a position where we could buy a horse while he is still racing with a view to standing here, but we are quite happy with our current position, especially when the political situation means so many things are up in the air.”

Six of the best

In the words of Alan and Tim Varey…

“He is a fantastically well-bred horse, by Cape Cross out of an Oaks winner. Conformationally you can’t fault him, and when we first saw him walk out it was a no-brainer.

“He’s had winners over jumps and on the Flat and we’re just waiting for more to come through. He’s a gentleman, a little bit cheeky at times, but there is no malice – and he’s a gent with his mares too.”

“He’s an absolute pleasure to work with, and so kind. The only time you see him acting like a typical stallion is when he covers mares – once that is done he’s back to being very placid.

“He’s a stocky, compact horse, but the foal you will get depends on the mare he covers. He’s a Classic- winning miler who gets jumping winners.”

“We have a good relationship with David and Kathleen Holmes because we used to walk mares in to Passing Glance and Midnight Legend. When they gave up stallions Passing
Glance came here, and he’s a really lovely horse who improves his mares.

“He’s a dual-purpose horse, with very good statistics and well supported by the Balding family [he won races for both Ian and Andrew Balding].” 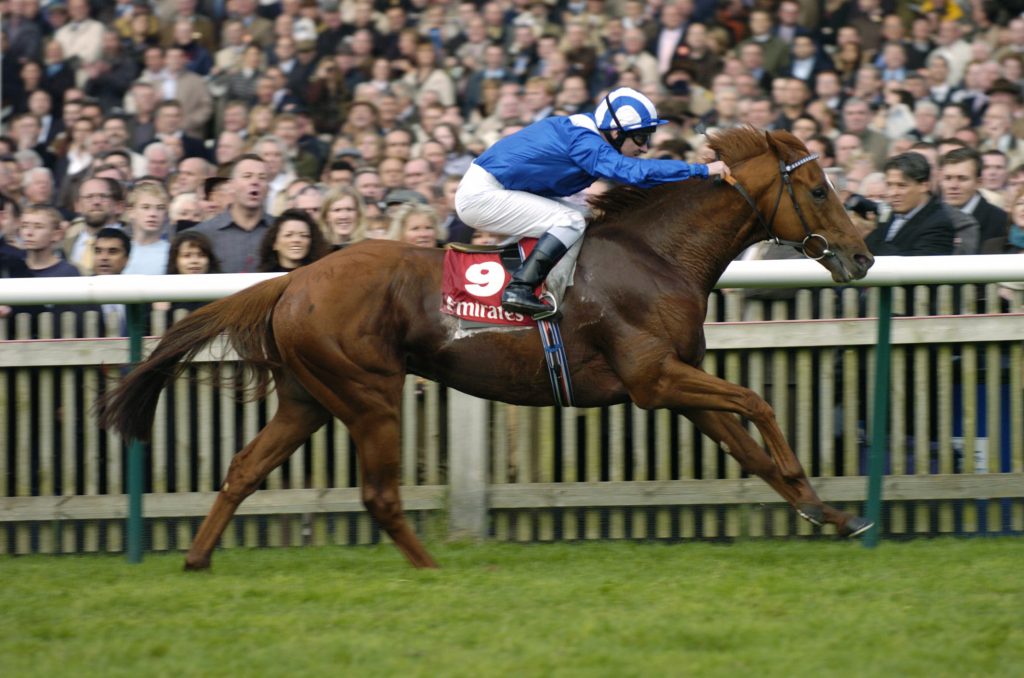 “He’s a cheeky lad, but there’s nothing aggressive in him. That’s true of all our stallions, but I think the way we keep them, in the main yard where there is always lots going on, and mares come and go, helps in that regard.

“We are looking forward to seeing what winners come out of France, and he’ll be in Newmarket on show during the February Sale when we hope lots of people will come and have seen him.”

“We are very excited about him and there has been lots of interest, and a number of bookings. I’m sure he will be popular at the parades. He had been in a livery yard after leaving racing, and we thought he might be a bit buzzy once he came into a bigger yard with other stallions, but he’s been fine and has passed all the early tests.

“It’s great to have another Classic winner on the stud, and he’s by an outstanding sire.”

“We’ve long wanted to stand a sprinter, and he’s a particularly lovely, big horse. He has plenty of stock to come out and run from his time at Whitsbury. He’s as cool as a cucumber and we’ve been told he’s very good when it comes to covering.

“He has made a very promising start with his first two- and three-year-olds, and I’m sure his initial black-type winner will come this year. Trevor Harris is as passionate about the horse as we are, and he is sure that winner is going to come too.” 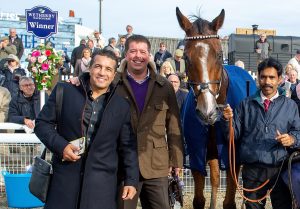 Up Next
Double act dreams