Jezki in command for Harrington
Stories

One of the most popular results of the week was delivered by Sire De Grugy, who landed his third Grade 1 victory of the season with a six-length strike in the BetVictor Queen Mother Champion Chase on the second day of the Cheltenham Festival.

Riding for his father Gary, Jamie Moore had the chestnut son on My Risk held up towards the rear of the field through much of the strongly-run race before making his challenge just after the second-last fence. Somersby survived a blunder at the third last to take the runner-up spot with Module just a neck behind him in third.

Sire De Grugy finished last season with victory in the Celebration Chase at Sandown and he has maintained a spotless record since then, with victory in a handicap chase at Chepstow last October augmented by success in the Tingle Creek Chase and Desert Orchid Chase in Dcember followed by the Clarence House Chase at Ascot in January.

A clearly emotional Gary Moore pointed to the criticism of his horse in the wake of the absence of last year’s Queen Mother winner Sprinter Sacre, saying: “He can’t do any more then what he has done. He has gone out there today and done it. Jamie knows what he is doing and he has given the horse an absolute peach of a ride. I am so thrilled for everybody concerned.

“There’s a lot of people who deserve thanks for this. I have never had so many text messages – it started at six o’clock this morning – and I am just glad he has won for them as much as anyone else.”

Jamie Moore was clapped back into the winner’s enclosure by weighing-room colleagues without a ride in the race who had gathered to welcome back the popular winner.

Gary Moore added: “It’s Jamie’s first Festival winner and the other jockeys coming out afterwards proved how popular Jamie is. And seeing Ryan [Moore] there as well. It meant quite a lot. It probably has been done before but I haven’t seen it done for a long time.

“This means so much to me and my family. It’s something I thought could happen but these things don’t happen very often. I suppose I’m very lucky to have such a great family. I’m proud of all of them.”

Jamie Moore was equally proud of his father’s handling of the champion chaser thoughout the season. He said: “I’ve done a lot with this horse back at home and am very proud of him. All the credit has to go to Dad as he’s done brilliantly with him this season. He’s had quite a few runs so to be able to bring him up to win and wind him down afterwards takes quite a bit.

“We also took him to the beach a couple of weeks ago and he worked well so he clearly thrives on the regime that Dad gives him. It’s been a brilliant day as apart from Josh and Hayley [Moore’s brother and sister], everyone we know is here and it’s great to share it with them.”

The jockey added: “Dad told me to take my time and settle him into the race so I tried to follow his instructions as closely as I could.

“He’s obviously improved this season but I’ve been impressed with the way he’s learned to fiddle his fences when he meets them wrong – he’s very good at that now. He was travelling really well coming down the hill and when I passed Ruby, I asked him ‘what do I do here?’ as he’s the one who has ridden all the winners here! Ruby told me to get myself up there and sit just behind Davy [Russell] so after he’d finished giving me a riding lesson, I made my move!” 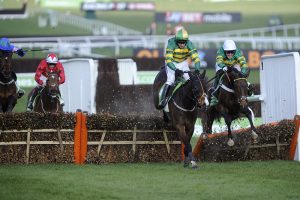 Up Next
Jezki in command for Harrington