Who’ll be Boss at Ascot?
Stories

The day Investec signed the three-year sponsorship deal for the Derby meeting was not just a good one for the Epsom management team but for British racing in general.

Anyone who has read the ‘Talking To’ feature in the June issue of Thoroughbred Owner & Breeder cannot fail to be impressed by the passion and enthusiasm for racing and breeding espoused by Investec’s Managing Director Bernard Kantor, and his company has done much to raise the profile of the blue riband with an extensive and classy marketing campaign alongside its sponsorship commitment.

Kantor has had a long-term and global connection with the sport and he will doubtless have enjoyed the result of the Investec Oaks more than any other race during the excellent two days of racing on the Epsom Downs. The winner, Dancing Rain, was trained by his good friend William Haggas for Martin and Lee Taylor, but Haggas and Kantor have also enjoyed much success together on the track via the likes of Count Dubois, King’s Apostle and the half-siblings Moon Dazzle and Dupont. The last three named were all bred by Kantor under his Wentworth Racing banner.

“The late Laurie Jaffee recommended me as a trainer to Bernard and the first horse I trained for him was Main Street back in 1997,” says Haggas, still hoarse from roaring home Dancing Rain more than 48 hours after her Classic success. “He’s a wonderful man to train for and he was thrilled that we won the Oaks.”

Despite having a 100% strike rate with his runners in Epsom Classics – Dancing Rain having added to Shaamit’s 1996 Derby win – Haggas’s greatest regret is South Easter’s late defection from the Derby line-up in 2009, the first year of Investec’s sponsorship. The Galileo colt is owned in partnership by Kantor and Marcus Jooste.

The trainer says: “From my point of view, preparing South Easter to run in the Investec Derby was like Sir Michael Stoute preparing Carlton House. When he scoped badly and I had to give Bernard the bad news, he said simply, ‘You have to do what’s right for the horse’. He didn’t even flinch and I know how desperately he wanted a runner in the Derby.” 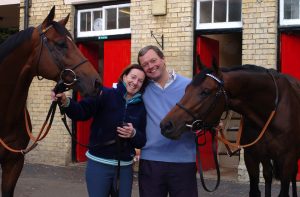 Kantor was not the only one close to Haggas delighted to see Dancing Rain earn her Group 1 laurels. The trainer’s wife, Maureen, who, as a daughter of Lester Piggott must have a genetic pull towards Epsom, was the filly’s regular rider at home until an accident in early May left her with a broken leg.

“Maureen was just putting Dancing Rain through our practice stalls at home and she jumped awkwardly and the filly went one way and Maureen the other,” recalls Haggas. “It was the day after her 50th birthday so I teased her that old women shouldn’t be riding racehorses but it’s been incredibly frustrating for her not to be able to ride Dancing Rain in the build up to the race.”

Judging by the broad grin on Mrs Haggas’s face as she hopped on one crutch in the wake of their Oaks winner on Friday afternoon, she has long since forgiven both Dancing Rain and her husband for his unfortunate sense of humour. 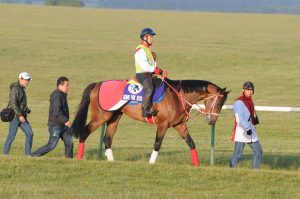 Up Next
Who’ll be Boss at Ascot?