Excitement and nerves as Ardad’s first crop hit the track

The advent of the new Flat Turf season, which commences at Doncaster on Saturday, brings with it the newest class of freshman sires. For Simon Sweeting and Overbury Stud, it heralds the arrival of Ardad’s first crop of two-year-olds hitting the track.

Ardad was a high-class youngster himself. Having been sourced from the Goffs UK Breeze-Up Sale in 2016 for £170,000, he went on to capture a 5f novice maiden before registering a cosy three and a quarter length victory in the Listed Windsor Castle Stakes for trainer John Gosden and owner Abdullah Saeed Al Naboodah.

While he disappointed in two subsequent starts after that success, he bounced back to winning ways in the Group 2 Flying Childers Stakes. Despite failing to sparkle as a three-year-old, his commercial appeal was obvious as a son of Tally-Ho Stud’s Kodiac.

Installed at Overbury for the 2018 breeding season at a fee of £6,500, Ardad covered over 130 mares in his first season at stud and according to Weatherbys is the sire of 90 foals of racing age.

The next stage of his stallion career will begin on Saturday when the Richard Fahey-trained Vintage Clarets takes his chance in the Brocklesby Stakes against nine rivals, a prospect that fills Sweeting with both excitement and nerves.

He said: “It is exciting because it’s what we all do our work for so that we can see them perform and wonder how they’re going to get on. It’s very nerve-wracking and obviously there’s plenty of others that are looking to get out of the stalls quickly.

“There’s a Cotai Glory of George Boughey’s [Forca Brasil] that we’ve been hearing a bit about. But look, Richard Fahey had two entered and this is the one he picked. I’m sure he’ll be there to do himself justice and it’ll be fascinating to see how he gets on.

“I’ll be holding my breath for a few minutes and probably turning blue!”

Sweeting is all too aware the harsh realities of the bloodstock market in this day and age and the barometers that will be used in order to judge a stallion’s success with their stock on the racetrack.

He added: “I’m very conscious that nowadays stallions aren’t given too long to prove themselves one way or another. I imagine we’ll see fairly quickly how they’re getting on. If they perform well that’s fabulous, if they take a little bit of time, then that’s going to be a little worrying for us.

“I remember when Bertolini got started and he had a very, very slow start the first month or two because it was a wet spring, and they didn’t particularly go on it and we were scratching our heads saying what’s happening here?

“Then suddenly the ground dried up and they were winning all over the place. We probably do judge stallions a little quickly nowadays but that’s how it is and what we’ve got to go along with.

“But the trainers, we’ve spoken to a lot of them, are very positive about them [Ardad’s juveniles]. What they’re saying is that they’ve got fabulous temperaments, they take their work well, they’re very sensible, they’re keen to get on with the job and they’re cool-headed, which is definitely going to be a help for them.

“We’ve just got to wait and see what happens with them now. The great thing is they are with good trainers, sensible people who won’t rush them but they’re not going to miss opportunities either.

“Interestingly, Ardad has got a much better book this year than last year so presumably breeders are hearing positive things and are happy to take a chance on him.”

In terms of what to expect from Ardad’s youngsters and whether they will display his penchant for speed, Sweeting is keen to indicate it is far too early to tell but did say: “Looking at him as a physical specimen, to me he is all about speed.

“He’s not over-big, he’s got a huge great back end and is a compact, strongly muscled horse. You would expect his progeny to be fast.”

While Vintage Clarets will fly the flag on Saturday for the young upstart, there are plenty more of his stock waiting in the wings including a filly out of Lastuce who was bred and raised at Overbury and bought by Robson Aguiar for £34,000 at last year’s Goffs UK Premier Yearling Sale.

There is also Saliteh, out of the Poet’s Voice mare Poesy, who was bought by Peter and Ross Doyle Bloodstock for £43,000 at the Tattersalls Ascot Yearling Sale at Newmarket. The agents also secured a filly out of Amour Fou for £26,000 at the same auction.

On Saliteh and other members of Ardad’s first crop, Sweeting said: “She [Saliteh] had a back end that would fill a barn door – it was just exactly what you expected and wanted to see. I’m very much looking forward very much to seeing her.

“There’s one that we bred here out of Miss Villefranche that we sold as a foal to Roger O’Callaghan and that’s now with Richard Hannon. I’ve seen some videos on Richard’s website and I don’t think he’s doing too much because he’s quite a big horse but that’s one I’m particularly looking forward to seeing.

“There’s one out of Heavenly Angel that Joe Foley bought up at Goffs UK and again, a filly, and she was particularly attractive as she moved fabulously. It’ll be interesting to see what happens with her.

“We’re obviously very excited and as I say, this is what you do it for and hopefully we’ve got a very exciting couple of months in front of us.” 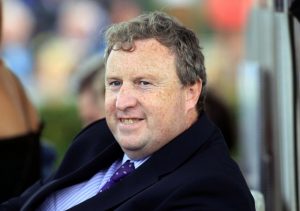 Up Next
Brian Kavanagh to leave Horse Racing Ireland in September