When it comes to bargain buys it is difficult to look past Jet Setting, who was pinched out of Richard Hannon’s yard for £12,600 at Tattersalls last October before going on to defeat Ballydoyle’s super filly Minding in the Irish 1,000 Guineas. The Adrian Keatley-trained three-year-old subsequently fetched an eye-watering £1.3 million when reoffered at the Goffs London Sale in May.

However another of this year’s European Classic winners was bought for much less: step forward Flanders Flame, the first Portuguese winner of the Spanish 2,000 Guineas.

The son of Dutch Art was initially sold as a yearling for 90,000gns at the Newmarket October Sales in 2014 to Rabbah Bloodstock, sporting the silks of Sheikh Rashid Dalmook Al Maktoum, who has enjoyed success in recent seasons with talented fillies Rizeena and Besharah.

Flanders Flame was sent to Richard Fahey and made his first racecourse appearance last May, finishing last of eight in a maiden at Chester. He then went on to run four more times for Fahey and was unable to reach a placing, including in two handicaps, achieving a lowly BHA rating of 54.

Having accumulated £361 at Mews House, he was sold at Tattersalls last October for a second time, this time claimed for 2,000gns by Portuguese trainer, Helder Pereira. Since his move to the Iberian Peninsula, he has gone from strength-to-strength and has amassed prize-money way in excess of the fee he was picked up for.

The first of his victories in mid-winter at La Zarzuela, in Madrid, and Dos Hermanas, in Seville, may have signalled progression but certainly didn’t prepare the Spanish racing community for what was to come next.

On April 17, a frenzied announcer called home the gelding as he shot clear of his field in the Spanish 2,000 Guineas to win by seven and a quarter lengths from the favourite Arguero. The triumph saw connections pick up a first prize of €30,000 – 15 times the amount they paid for him – and was made even more remarkable by the fact that he was sent off the outsider of the whole field at 20-1.

With jockey Ricardo Sousa gesticulating wildly in the saddle before crossing the line, it was the first Portuguese victory in a Spanish Classic, a genuinely groundbreaking result. His superiority in the race may have been aided by extremely soft ground on the day in Madrid.

For most winners of the race a tilt at the Spanish Derby would be the logical next step, yet as the race is restricted to colts and fillies, it was not an option.

For former trainer Fahey, Flanders Flame’s breakthrough on the continent came as something of a surprise – although he knew his best years were probably in front of him.

He was quite a backward horse with us, but a big good-looking type

“He was quite a backward horse with us, but a big good-looking type. He seemed the kind to do better and improve as he got older for sure,” reflected Fahey.

“It’s tricky to equate form over there but if they ever wanted to send him back to us we’d be more than happy!”

Since his Classic success, Flanders Flame has run creditably in the Gran Premio Claudio Carudel on June 19, finishing runner-up to none other than Noozhoh Canarias, one of Spain’s best exports who ran a creditable sixth in the 2014 2,000 Guineas behind Night Of Thunder.

One week later, he went on to run in Spain’s richest race, the €102,000 Gran Premio de Madrid, and put up one of his best performances, finishing third behind Madrileno over an extended mile and a half, earning €12,000 in the process. 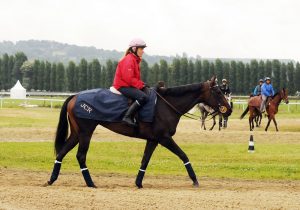