A highly encouraging renewal of Arqana’s August Yearling Sale got the European season off to a positive start with gains across the board, including a near 36% rise in turnover and four seven-figure lots.

Top of the pops in Deauville was the Coulonces Consignment’s filly by Dubawi out of Hit The Sky, an unraced Cozzene half-sister to Doncaster Cup winner Honolulu, whose price reached €1.5 million when knocked down to Australian-based agent James Harron Bloodstock on behalf of a new, unnamed investor.

Dubawi, who ended the sale as leading sire, his eight yearlings selling for an average of €579,375, was also responsible for one of three yearlings to fetch €1 million. The colt in question was bred and consigned by Ballylinch Stud and is out of the Indian Ridge mare Mise, the dam of Falmouth Stakes winner Nahoodh. Peter and Ross Doyle bought the chestnut colt, who is to be trained in the UK by Richard Hannon.

The other two millionaires were both daughters of Dubawi from families whose representatives traditionally fare well at the August Sale. The filly out of Alpine Rose, whose Sea The Stars half-brother topped last year’s sale at €1.2 million, was sold to MV Magnier on behalf of Coolmore, and he also picked up the Galileo three-parts-sister to Irish Oaks heroine Chicquita. Both fillies were consigned by the sale’s leading vendor, Ecurie des Monceaux, which received €5,607,000 for 24 yearlings sold.

A full report and pictures from Arqana’s August and inaugural V2 Sale, along with the DBS Premier and Festival Yearling Sales, will appear in the October issue of Thoroughbred Owner & Breeder. 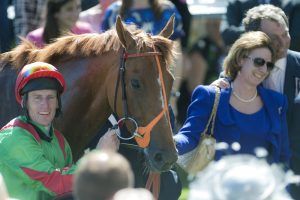 Up Next
Dancing Rain set to be star