Dr Statz – John Boyce – runs the rule over the European Yearling market, and unearths some surprising stats when looking at the profitability of mainstream stallions

The European yearling market took a gigantic step forward this season. Of that there is no doubt. But that doesn’t mean everyone wins. No, like all dynamic markets there must always be both winners and losers. It is just a matter of the relative size of each group. Despite the record-breaking numbers at the Tattersalls October Sale this year, would it surprise you to know that only 41 per cent of all yearlings in Europe this year by stallions with ten or more sold – in other words the mainstream stallions – made a profit after you add £20,000 keep costs to the advertised fee of each stallion? Or for that matter, that only about 52% of this cohort of stallions posted an average profit after the £20,000 keep charges are added. These are sobering statistics.

However, the market did expand and that is good news for everyone, but whether the expansion is sustainable or not, only time will tell. Can we say for certain that Sheikh Mohammed will be back to spend another £25 million next year or the year after? For the record, £390.6 million has been spent on yearlings in Europe this year, considerably more than the £317.1 million the year before, and we still have a few sales to come. That’s a whopping increase of 23 per cent.

Can we say for certain that Sheikh Mohammed will be back to spend another £25 million next year or the year after?

Even with this influx of investment, not all sires benefitted. In fact, most of the new money went on the choicest lots, those by the super sires or sires on the way up. Dubawi yearlings were clearly the first choice of the Godolphin buying team and this showed in the stats, his average price increasing by £285,000 (+53 per cent) from a year ago. Frankel too benefitted from the increased demand, his average climbing by £255,000 (+75 per cent).

Of course, both had exceptional years and as Dubawi turned 20 this year, there was also a rarity factor at play this year. A stallion that still averages over 16 per cent stakes winners to runners and who can get you a Group 1-winning sprinter in Naval Crown, a Guineas winner in Coroebus and a St Leger winner like Eldar Eldarov in the same season, is bound to be highly sought after.

The same is equally true of Frankel, who has just had his fee increased by £75,000 to £275,000 for 2023. With six Group 1 winners this year ranging from Arc heroine Alpinista through to Group 1-winning three-year-olds Westover, Onesto, Inspiral and Nashwa and Dewhurst Stakes scorer Chaldean, Frankel is currently riding the crest of a wave.

An increase in fee like that, however justified from the stallion’s point of view, means commercial breeders will need to be ever mindful first that their mare has a good enough pedigree and that she is a proven producer of well-conformed stock. A break-even point of around £300,000 at the yearling sales is an extremely high hurdle to clear.

Take the case of No Nay Never this year, who perhaps didn’t attract enough of the quality of mare his 2020 concepting fee of €175,000 warranted. The son of Scat Daddy could not have a better year on the racecourse, siring three Group 1-winning two-year-olds in Little Big Bear, Blackbeard and Meditate, plus three other Group-winning youngsters, not to mention Alcohol Free. Though he had plenty of big-ticket sales, including Blackbeard’s €2.6 million sister at the Goffs Orby Sale, plenty failed to turn a profit for their vendors. By my reckoning, only 28 (40 per cent) of his 70 sold at the main sales brought enough money to cover their advertised fee, plus £20,000 keep.

Of course, you can also undersell stallion nominations and with the benefit of hindsight that is probably why Darley’s Night Of Thunder proved such a lucrative investment in 2020. After his meteoric rise in 2019, his fee was set at €25,000, still below his introductory fee of €30,000, ostensibly because he had yet to sire a Group 1 winner. Naturally, breeders flocked to him and in the end, he covered 236 mares, which understandably featured over 100 elite mares, more than he attracted the following year at a fee of €75,000 and just as many as he did in 2022 again at a fee of €75,000.

The upshot is that Night Of Thunder’s yearling average sky rocketed to £197,346 this term, almost £100,000 higher than the previous year, a 98 per cent increase that represents the best commercial performance of any European sire standing at above £10,000 in 2020. Naturally, the pressure is now on the Darley stallion to continue to deliver stakes winners at his current rate if not better while a few more top-class Group 1 winners will also be expected. Remarkably, the Dubawi stallion posted a fee multiple of 8.7 again, comfortably the best by a £10,000-plus sire.

The upshot is that Night Of Thunder’s yearling average sky rocketed to £197,346 this term, almost £100,000 higher than the previous year

Along with Dubawi and Frankel, Siyouni was the only other sire to add more than £100,000 to his last year’s yearling average. Overall, the Aga Khan stallion ranks fourth among active European sires by average, which is slightly surprising given that he supplies stakes winners at a conservative rate of 7.9 per cent, his fillies being much more comfortable in stakes company (ten per cent winners to runners) than his male offspring (five per cent). He has yet to sire a top-flight winner from his current three-year-old crop, but his juvenile daughter, the impressive Moyglare Stud Stakes winner Tahiyra, put his name up in lights just before the main yearling sales got under way. It was a timely reminder of what the sire of St Mark’s Basilica and Sottsass can do. Once again, though, his €100,000 conception fee made it difficult for quite a few vendors.

Like his old adversary Night Of Thunder, Kingman too could have covered at a higher fee in 2019 after his first crop pleased everyone, but even a rise from £55,000 to £75,000 wasn’t enough to dampen demand for his services in the spring of 2020. He ended up serving 253 mares, including 150 that you could pretty much label top-class mares. Thankfully, the Banstead Manor Stud stallion is now beginning to reap the rewards from this stellar book through the likes of the unbeaten pair, Group 1 winner Commissioning and Group 2 scorer Noble Style, plus progressive colts like Nostrum and Epictetus.

A doubling of his fee to £150,000 in 2021 did have the effect of reducing his book size while improving the quality within it, but his better yearling average (up 34 per cent this year) will still not have made it easier for some Kingman vendors this autumn, so a return to £125,000 for 2023 does make sense.

Of the 112 sires that had at least ten yearlings sell this year and last, 58 (or 52 per cent) improved their average yearling price this term. And the biggest improvers ranked by percentage gain in yearling average are not at all confined to the top echelons. For instance, the young Kodiac sire Prince Of Lir, improved his yearling average by as much as 170 per cent from 2021 to 2022. Alas, it had as much to do with his €300,000 Goffs Orby half-brother to dual Group 3 winner and Group 1-placed Oscula as it did with his progeny performances on the racecourse in 2022, although he did sire a new Listed-winning juvenile in Prince Of Pillo during the year.

More reasonable was the 106 per cent hike in Havana Grey’s average price. Both he and Sioux Nation have set a blistering pace with their first two-year-olds this year. Given that Havana Grey’s second crop, unlike most sires, seems just as strong as his first, an increase from £29,000 to £58,000 would seem reasonable. With five stakes winners and three Group winners already in the bag, buyers were entitled to get excited about the progeny of the Whitsbury Manor Stud stallion. Yearlings by Havana Grey’s arch-rival Sioux Nation, operating off a higher fee and a weaker crop than his first, wasn’t as popular.

In terms of by how much a stallion’s average eclipsed his conception fee, a metric that always favours the cheap sire on the upgrade, Mehmas comes out on top after another good year for the Tally-Ho Stud stallion. His 2022 yearlings were produced off a €7,500 fee and the son of Acclamation stood at €50,000 in 2022.

Ardad, too, with his £6,500 asking price and a triple Group 1 winner to his name in Perfect Power, a new recruit to Darley’s roster for 2023, also produced a yearling average over ten times his fee. 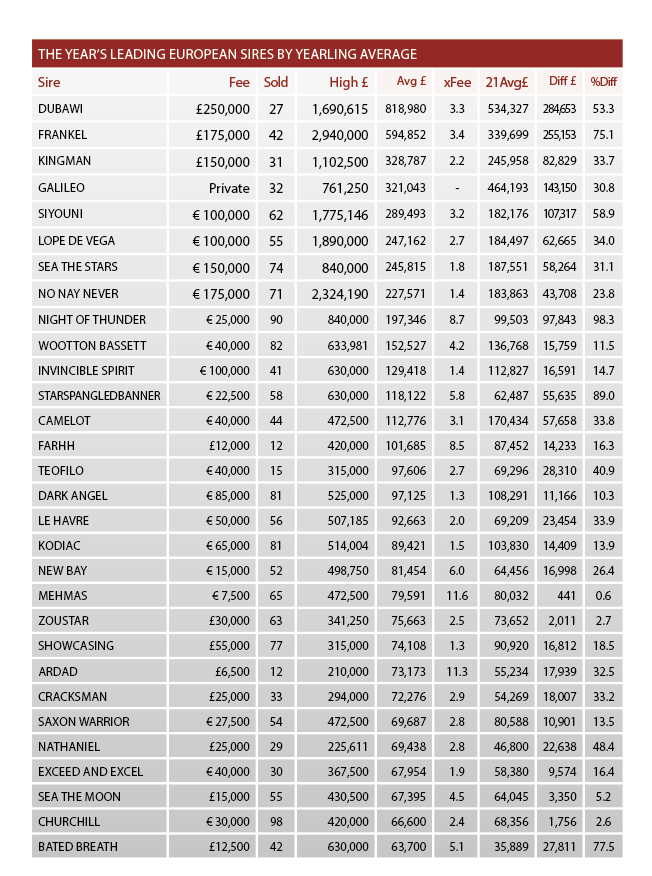 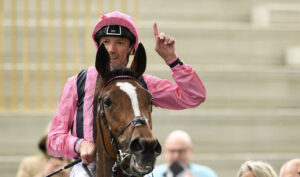