Erhaab to stand at Batsford Stud

Erhaab will soon be taking up residence at Batsford Stud

Erhaab, the winner of the 1994 Derby for Sheikh Hamdan Al Maktoum and John Dunlop, is to stand at Batsford Stud in Gloucestershire in 2012 following the closure of Bill Bromley’s Wood Farm Stud.

Now 20, Erhaab, who is still owned by Shadwell, joins Pasternak and Kadastrof on the roster at the historic stud just outside Moreton-in-Marsh, which is run by Alan and Anna Varey and their son Tim.

Erhaab, by Chief’s Crown out of the Riverman mare Histoire, has stood the last four seasons in Shropshire, with his fee last year advertised at £1,000. Among his good performers on the track this season is the seven-time winner Sohraab, who is trained by Hughie Morrison and part-owned by Mike and Carole Middleton, the parents of the Duchess of Cambridge.

Top-rated of his National Hunt runners is Sitting Tennant, winner of the Grade 2 John Smith’s Champion Bumper at Aintree who runs in the colours of Graham Wylie.

“We’re delighted to have secured Erhaab to stand here at Batsford and we’re really looking forward to his arrival,” said Alan Varey, who also confirmed that Cambridgeshire winner Pasternak, who moved to Batsford from Ireland in August 2010 and is the sire of promising chaser Little Josh, will be joining the TBA National Hunt Stallion Parade at Cheltenham racecourse on Friday, November 11. 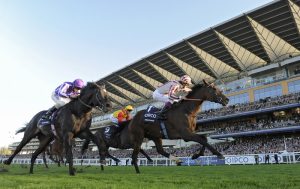