Equine influenza (EI) is a viral infection with the potential to cause significant illness and economic loss for the thoroughbred racing industry.

Symptoms include high temperature, runny nose and a dry cough that might persist for several weeks. Many affected horses go off their feed and become dull or depressed and some acquire secondary bacterial infections. Some might need to be on the easy list for many weeks in order to recover fully.

While deaths from the infection are rare, it is highly contagious and so we must not underestimate the significant risk of spread from one infected animal through a large number of horses in a short period of time. The infection is spread by direct contact between horses but can also be readily distributed quite long distances in droplets coughed or sneezed about by an infected horse.

No better example of the potential cost of an outbreak of EI can be found than that of the Australian experience of only a few years ago. Prior to 2007, Australia was free from EI. However, in August 2007, EI was diagnosed in a quarantine station on the outskirts of Sydney but, owing to a serious breakdown in biosecurity measures, was able to spread with frightening speed through NSW and Queensland.

A report from the NSW Department of Primary Industries dated July 1, 2008, a few months after the country was declared once more free of EI, stated: “The outbreak that eventuated was the most serious emergency animal disease Australia has experienced in recent history. At its peak, 47,000 horses were infected in NSW on 5,943 properties, and horse owners and industry workers were facing dark times with major impacts on their livelihood and lifestyle.”

The outbreak was brought under control by a combination of strict event and movement bans, widespread testing and isolation of suspected and confirmed cases and the strategic use of vaccination to halt the spread from affected areas. It took several months and the cost to racing and other equine (and agricultural) activities was astronomical.

More recently and much less dramatically (fortunately), EI continues to appear in many countries. According to the World Organisation for Animal Health (OIE), in 2012 alone there were individual animal cases and/or outbreaks of equine influenza reported by Argentina, Chile, France, Germany, Ireland, UK and the USA. EI was also isolated and/or characterised in quarantine stations from horses recently imported from Uruguay into Dubai and from Belgium into Japan.

Without doubt there were and are many other undetected, undiagnosed or unreported cases. This is frustrating but not surprising as clinical signs can be mild in some horses and can resemble other respiratory diseases. Some vets and owners are reluctant to test and some are unable to access appropriate laboratory facilities. Young horses in particular are prone to respiratory infections (like children) and so the odd bit of coughing, temperature and runny nose might be overlooked in individuals or small numbers of horses. The situation becomes much more worrying when a larger proportion of horses in a training yard are affected or the horses are more obviously ill.

But they are all vaccinated, aren’t they?

This is where this EI story becomes more complicated and I apologise in advance for some of the ‘jargon’ I am about to use. EI can and does occur in vaccinated horses. Part of the reason is explained by the fact that very few vaccines for any disease are 100% effective at preventing disease – and EI is no exception.

In general terms, vaccines work by stimulating the immune system to produce antibodies and to prime special immune cells against specific disease causing organisms (pathogens), in this case the EI virus (EIV). It is important to note that vaccination for EI does not stop exposure (i.e. initial contact), nor does it always prevent infection (when the virus actually invades the tissues and starts to multiply) but it does prepare the immune system to mount a more targeted and effective defence more quickly in the event of infection.

In many cases, this means that no disease/clinical signs are experienced even if infection occurs or that clinical signs will be significantly diminished in severity and duration. An added bonus is that any infected, vaccinated horse will shed fewer infective particles and for a shorter period of time and is therefore less likely to spread the disease to others. Actually having the disease naturally will also act like a vaccine and provide some protection against future infections with the same pathogen. For some diseases, this protection can be lifelong. For others, including EI, the duration of immunity is relatively short-lived.

Vaccines are limited in their ability to permanently prevent disease by many factors. The main one is the nature of the pathogen. Some pathogens are pretty straightforward in their action and the disease they cause can be completely prevented by vaccination. Tetanus is a good example of this. Other pathogens are more complicated as their ability to cause disease is supported and enhanced by a number of their component parts. This makes the production of an effective vaccine difficult if not impossible.

Another complicating factor is that some pathogens constantly alter their ‘structure’ slightly over time. This last group includes the EI virus. Very slight changes in a virus can influence its ability to cause disease and can also mean that existing vaccines lose some or all of their effectiveness against infection with the ‘changed’ virus. This creates a need for the vaccines to be constantly updated to remain effective.

The EI viruses consist of a large number of marginally different viruses – some of which we have not seen for many years. Since about 1956, scientific advances have permitted increasingly detailed examination of the differences in structure allowing specific identification of the viruses associated with each of the outbreaks which have occurred since that time. What has become obvious is that  of the two originally identified strains, H7N7 (Equi 1) and H3N8 (Equi 2), it is only the latter which is still of concern to us.

Furthermore, the H3N8 group has undergone further branching so that we are now almost exclusively dealing with disease caused by H3N8/America/Florida strains. This last group is subdivided into Clades 1 and 2. Of the 2012 outbreaks, Clade 1 was involved in France, Germany, Ireland, the UK and the Japanese quarantine facility. Clade 1 virus was identified in Argentina, Chile, USA, Germany and the Dubai quarantine station. Outbreaks affected horses that had been correctly vaccinated. The vaccines used had included one updated with a Clade 1 virus (in accordance with the OIE recommendations of 2004).

The vaccine manufacturers all provide a recommended schedule for administration to provide protection against EI. In many cases, this varies, at least in part, from the BHA (and FEI) requirements. Regular revaccination after the initial primary course is essential to maintain any level of protection. Many trainers and vets revaccinate more frequently than manufacturers’ recommendations in an attempt to maintain protection, particularly during the Flat racing season.

Commercial EI vaccines contain two or three strains of either killed EIV or ‘live’ virus – the latter is specially modified to ensure that it does not actually cause disease when injected. The vaccines vary in which strains they contain and how the virus is prepared/carried and this affects the type of immune response which develops and which viruses families are protected against.

The ‘older’ the virus strains contained in a vaccine, the less effective the protection is likely to be. Of major concern is that in spite of OIE recommendations of 2010 and 2011, none of the available vaccines have been updated to include a virus from Clade 2 for optimum protection and only one vaccine contains the recommended strain Ohio ’03.

To quote from the OIE Expert Surveillance Panel on Equine Influenza Composition, March 2013, in relation to the 2012 outbreaks: “There was evident lack of vaccine effectiveness against both Clade 1 and Clade 2 viruses. The detection of Clade 1 and Clade 2 viruses in quarantine facilities… illustrates the ongoing risk of international spread of influenza by infected vaccinated horses, the need for optimum protection and the requirement for vaccines to be updated with strains from both Clades.”

The decision as to which vaccine to use will be influenced by cost, previous experience with different vaccines and the scientific evidence of the efficacy of the vaccines. There is considerable competition between manufacturers to try to convince us that their vaccine is at least as effective as the competition, if not more so. In return we need to push the vaccine manufacturers harder to ensure that all the available vaccines provide optimum protection against this disease.

What do we need to do?

All owners should be encouraged to test and take samples from suspected cases so that the virus can be constantly characterised for monitoring and future vaccine requirements. Foals should start their primary vaccine course at around five to six months of age.

To reduce disease risk across the industry, everyone should ensure that their horses are correctly protected against EI. This means ensuring appropriate and full vaccination of all horses and encouraging the manufacturers to make and keep their vaccines as up to date as possible.

The more horses that are vaccinated, the better protected the horse population will be and the more inclined the manufacturers will be to invest in new technology and updated vaccines. It’s a win-win situation. 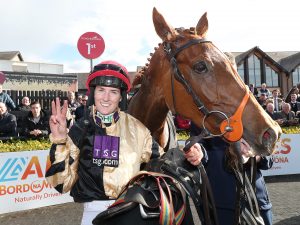 Up Next
The finish line with Rachael Blackmore