Epsom racecourse is driving a charity appeal in the memory of their former colleague Caroline Beaumont, who died last year at the age of 35.

‘Caroline’s Vision’ was launched at the track’s spring meeting in April, to raise funds for the Barts Cancer Unit, at which point more than £27,500 had been pledged towards the £100,000 target.

Caroline rode out for Epsom trainers Simon Dow and Pat Phelan, and worked for the Jockey Club, latterly at Epsom. She was a much-loved personality and a driving force of fundraising in the town.

She also organised the local owners’ and trainers’ awards evening for many years, and in 2010 was herself the recipient of the Stanley Wootton Award, named after the trainer whose commitment ensured the future of Epsom’s gallops facilities – the award goes to the person regarded as having contributed most to the town’s racing and training success.

Dow said in presenting Caroline with the award: “I don’t think there has been a more deserving recipient, because Caroline is typical of individuals who give more time than they have, and who put more emotion than they should into arranging things for others.”

Last month, the annual 21-mile Derby Walk, organised by John Sandys, from Knightsbridge to Epsom raised money for Caroline’s fund, while the culmination of events this summer will be a celebration of her life at Epsom on August 25, the Bank Holiday Family Raceday. 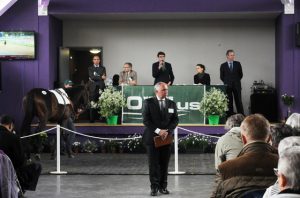 Up Next
Soaring to success