A landmark week for Dermot Weld was crowned in style as Harzand showed his trademark class and gritty determination to secure a third Irish Derby for the legendary Curragh handler. In what was also an emotional victory for the Aga Khan, whose famous green and red epaulette silks last tasted success in the race with Alamshar 13 years ago, the three-year-old’s victory took the trainer’s tally to 4,001.

In the week leading up to the race, the Weld team remained cautious given that the forecast showers did not arrive for their charge, but it was to make little difference.

From the outset the race looked to be going to plan for Rosewell House, as stablemate Ebediyin set honest fractions at the head of affairs allowing the favourite to slot into a handy third under Pat Smullen. Turning for home, the son of Sea The Stars travelled well on the outside of Port Douglas, one of four Ballydoyle colt’s in the lineup and took the lead with two and half furlongs to go.

Ryan Moore aboard Coolmore first-string Idaho tracked his main market rival throughout and came upsides with what looked a strong challenge within the final furlong. But the eight-time Irish champion jockey always looked to have matters under control and his mount stretched on again to win by half a length at the winning post.

The Aidan O’Brien team have traditionally had a stranglehold over the race, taking eight of the last ten runnings. This included most recently with the Ouija Board son Australia, the last horse to do the Epsom-Curragh double, but the County Tipperary maestro will have to wait a little longer for his 12th success in the race.

For Weld, the victory in the race follows on from Zagreb’s win in 1996 and Grey Swallow who won the race in similarly gutsy style in 2003 for his late mother Marguerite, who bred him.

In a month which has seen a host of breakthrough victories at Royal Ascot, Harzand’s triumph was to be Smullen’s first Irish Derby having previously gone close aboard 2008 runner-up Casual Conquest. His 15 year association with Weld – one of the most formidable partnerships in the world of racing – has never been stronger. The County Offaly talent continues to build a lead over his nearest rival’s in the jockey’s championship en route to a ninth title.

“He’s got such courage and determination,” reflected Smullen. “Ryan came there with one run and I needed this horse to dig deep for me and he did again

“The pressure was on today and we pulled it off.”

The pressure was on today and we pulled it off

Earlier in the afternoon, the Paul Deegan-trained six-year-old Sruthan got up in the closing stages to claim the Listed Celebration Stakes. The yards flagship gelding who won the Irish Lincolnshire earlier in the season was held up just behind the leaders on the inside under Colm O’Donoghue. After being switched out in the final furlong, he came with a strong run to collar last year’s winner Sovereign Debt.

The Group 2 Railway Stakes won in recent years by the likes of Rock of Gibraltar and Mastercraftsman, now high-class stallions, produced a thrilling finish in which Medicine Jack got up under Colin Keane to repel Ballydoyle’s Peace Envoy by half a length.

Coolmore’s previous six year dry spell in the contest continues, but for Ger Lyons and owner Sean Jones, the combination continue to highlight their dab-handedness with two-year-olds having gone close with the classy Psychedelic Funk in the Coventry Stakes at Royal Ascot.

British challenger Dream Of Dreams trained by Kevin Ryan was slowly away under Smullen but after recovering to dispute the lead over a furlong out, the son of Dream Ahead couldn’t find what was required in the closing stages. 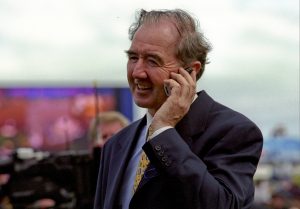