Tony Bloom’s Energumene followed up his Queen Mother Champion Chase victory at Cheltenham with an emphatic defeat of stable companion Chacun Pour Soi in the Grade 1 William Hill Champion Chase (2m) on the opening day of the Punchestown Festival on Tuesday.

Only five runners went to post for the two-mile feature and with Andy Dufresne departing at the first fence, it became a battle between Willie Mullins’ aforementioned duo and Envoi Allen and Captain Guinness representing Henry de Bromhead.

Paul Townend settled Energumene behind leader Chacun Pour Soi and Patrick Mullins with the de Bromhead pair close up in behind. The pace quickened jumping the third last and the race quickly became a match between the Mullins inmates, with the younger Energumene travelling noticeably sweeter than Chacun Pour Soi.

Although Chacun Pour Soi briefly appeared to have Energumene in trouble between the final two fences, the latter responded to Townend’s urgings and sealed the deal with a final leap at the last, running on strongly to score by eight and a half lengths.

JP McManus’s Capodanno made it a Grade 1 double for the Mullins stable in the Dooley Insurance Group Champion Novice Chase (3m½f) under Mark Walsh.

With favourite Bob Olinger disappointing on the better ground, pulling up under Rachael Blackmore, Capodanno was not hard pressed to defeat the game Lifetime Ambition by six and a half lengths.

There was an upset in the Grade 1 Bective Stud Champion Novice Hurdle (2m½f) as the Willie Mullins-trained duo Sir Gerhard and Dysart Dynamo ran below expectations, leaving the Gordon Elliot-trained 20-1 chance Mighty Potter and Jack Kennedy to see off 100-1 outsider Gatsby Grey under Barry Browne. 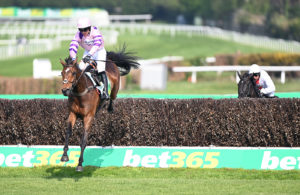