Paul Moloney has announced his retirement from race-riding and will return to his native Ireland to focus on building a breeding operation.

After establishing himself as a promising young point-to-point jockey and working under the tutelage of the likes of Jim Bolger, he relocated to Britain turning professional and joining Welsh-based trainer Evan Williams.

Since then, he has gone on to be recognised as one of the best in the business and has ridden over 840 winners.

The decision to exit the saddle has followed some serious injuries picked up over the past 18 months.

The 38-year-old broke his collarbone and suffered nerve damage to his shoulder after a fall from the Williams-trained Going Concern – in what turned out to be his final ride – in a handicap chase at Sedgefield at the end of January.

Only a year earlier he double fractured his left leg and suffered a broken ankle in a fall at Ludlow from Kudu Country.

Moloney said: “I’ve been so lucky and I’m very grateful to all the people who have helped me along the way.

“I have loved the job, but I think this is the right time to stop. I’ve had a lot of time off recovering from my shoulder injury, which was very frustrating.

“But it has also given me the opportunity to think about things and I feel that maybe the time is right to move on to the next stage of my life.”

His career was punctuated by big race success most notably in the Ruckers’ colours aboard State Of Play, who ran out an excellent winner of the 2006 Hennessy Cognac Gold Cup.

I have loved the job

More recently he tasted success in the Welsh National this time for trainer Richard Lee. Under a power-packed ride he drove home Mountainous to clinch the marathon prize by a mere head.

“It’s a big blow to the yard because he’s been such a wonderful man to work with,” added Williams.

“We both found each other at the right time of our careers. I was starting and he was coming over from Ireland. We had a wonderful working relationship and some great days.”

Moloney, who already has a few broodmares on his farm in County Tipperary, will intend learn more about the stud game at home over the coming months before expanding his breeding operation. 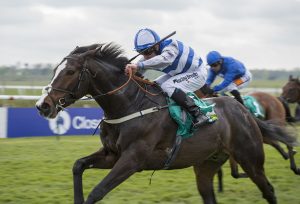 Up Next
Eminent bounds to classy Craven win