Nearly 40 years after having his first runner, owner/breeder Jeff Smith is still as enthusiastic as ever about the sport

Jeff Smith emits a smile of wry amusement when it is suggested an owner and breeder of his standing makes an ideal sounding-board for the raft of targets racing’s rulers have trained their sights on.

It is certainly a busy time on that front. Perennially challenging issues like poor prize-money levels have combined with the horserace betting right the Chancellor alluded to in March to raise the possibility of real progress in racing’s gridlocked corridors of power.

So who better to assess the landscape than Smith? He is soon to embark on his fourth decade of ownership, having raced his first horse, Rush Bond, in 1976. He has since campaigned Chief Singer, Lochsong and Persian Punch, who were acknowledged as champion racehorses in 1984, 1993 and 2003 respectively. And he has bred horses at his Littleton Stud, in Hampshire, for more than 30 years.

Furthermore, he is a steward of the Jockey Club, to which he was elected in 1984. He is also Chairman of Salisbury racecourse, and treasurer of the Injured Jockeys’ Fund.
He is supremely well placed to offer a balanced assessment, yet while few can bring such apposite credentials to the table, even fewer are in the sport for the same reasons as Smith. In thrall from the moment he first visited a racecourse, his passion has never waned. “You don’t lose it, do you?” the 69-year-old says. “I still love the game. I’d much rather do this than be sat on a yacht in the middle of the Caribbean.”

I can make sense of the outlay over a number of years. I certainly wouldn’t claim to be making a profit, but let’s not forget: this is a sport

The financial demands of breeding annually from 26 mares and putting all their progeny into training are a price he is happy to pay. Unlike most contemporary owner/breeders, he does not sell yearling colts to help balance the books. Any such sales come from the ranks of horses in training – like Norse Prize, a Listed winner in France whom he sold handsomely to Hong Kong last year.

“Whether we break even in a given year depends entirely on those sales,” he reflects. “I can make sense of the outlay over a number of years. I certainly wouldn’t claim to be making a profit, but let’s not forget: this is a sport. It will continue to be a sport to me until I can no longer afford it.” 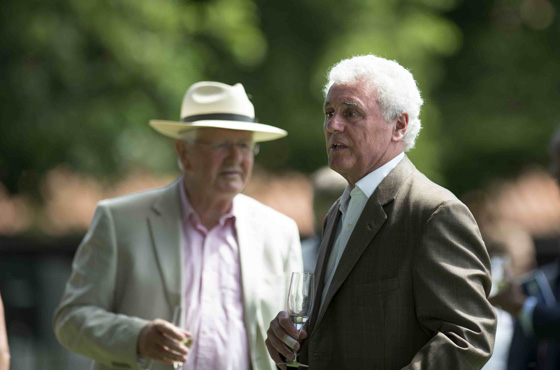 Jeff Smith with one of his long-term trainers, David Elsworth

That’s not to say he’s the type who writes cheques with reckless abandon. He has noticed the spiralling cost of nominations to pre-eminent stallions during a decade when economic hardship visited practically every walk of life except top-end yearling sales. He considers the impact it has had on his own breeding programme with a mild sense of exasperation, but he no longer dwells on the illogicality of it.

“Nomination costs have kept rising,” he reflects. “Or at least, they haven’t realigned in tandem with the state of the economy. But t’was ever thus. Racing and breeding defies any financial logic, primarily because the top end is driven by people for whom the cost of a nomination is irrelevant.

“I think the effects of high nomination fees are being felt by those at the lower end, but it all comes back to why people have horses in the first place. Nobody does it with the expectation of making money, and nor should they. The statistics are there for all to see and, to be fair, all professional trainers spell out the financial position from the outset.”

As he weighs up each argument it becomes clear that Smith is enchanted by the glorious uncertainty of the sport. He loves its capacity to surprise; he can even smile at disasters when sufficient recovery time has passed. It had made the ideal foil to a prolifically successful career in which Smith was Executive Chairman and Director of AIM Group Ltd (now AIM Aviation Ltd), a company that makes interior fittings for aircrafts, and which still occupies him two or three days a week.

Lochsong’s career makes a perfect vignette of Smith’s relationship with the sport. Sent home to Littleton in the midst of a three-year-old campaign that had yet to see her reach the racecourse, she thrived sufficiently for Smith to return her to Ian Balding’s stable for one last try. Given her disarming propensity to lose weight, a winning bracket – anywhere at all – would have been a bonus.

Yet Lochsong thrived to the extent she was virtually unbeatable when on song. She could be mercurial, as she showed in the 1994 Nunthorpe Stakes, when she lost all chance by bolting to the start. But she could be deadly, as she showed two months later when making all to win the Prix de l’Abbaye by five lengths.

Her career came in stark contrast to that of Chief Singer, whose prowess on the gallops was such that he was fully expected to make a winning racecourse debut in the 1983 Coventry Stakes at Royal Ascot. He duly obliged – and by four lengths into the bargain. Yet no horse epitomised the glorious uncertainty like Lochsong.

As you would expect, the broodmare band on Littleton’s 190 acres is well stocked with Lochsong’s relatives. The line is a fast one that has thrown a number of other above-average sprinters, in particular Lochsong’s Group 1 Nunthorpe Stakes-winning half-sister Lochangel. But Smith has raced successful horses across all the distance ranges.

During a barn-storming career spanning seven seasons, Persian Punch served up as much drama as Lochsong, if not more. Smith reflects that the respective experiences were quite different: Persian Punch never won a Group 1 race, whereas Lochsong won three. But the pleasure he derives is not confined to horses of Pattern calibre. Smith is of the ilk who believe an engaging story could be written about every thoroughbred ever foaled.

Since 2008 Smith has been Chairman of Salisbury racecourse, where he oversees the delicate juggling act of making a country venue punch above its weight. Salisbury does more than most tracks of its size to provide opportunities for better horses despite the associated risk of small fields. 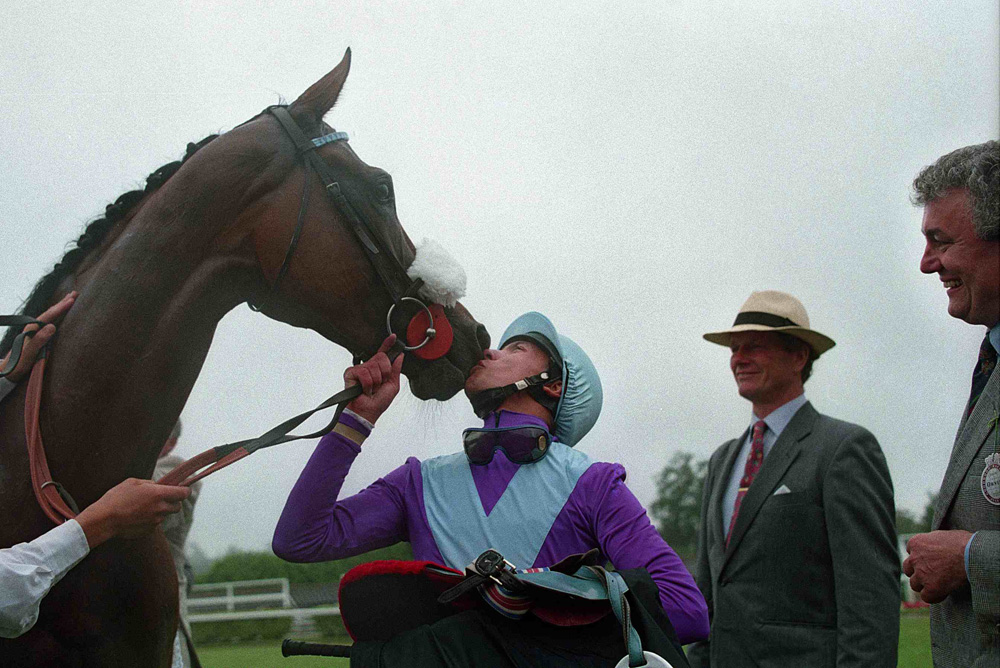 He is involved in race programming at Salisbury, a process that must dovetail with the policies laid down by the central authorities, yet despite first-hand experience of recurring trends within the horse population, which he has absorbed, he doesn’t incorporate that information into the breeding ethos at Littleton.

“You can’t help but notice the sort of races that struggle to fill, but that has no impact on the sort of horse I’m trying to breed,” he says. “To my way of thinking, the two processes are not connected. You might think it made sense to breed the sort of horse for which opportunity abounds at the time of the mating, but you’ll have to wait three years before you race the progeny. In that time the whole landscape might have changed.”

Nor is Smith convinced there is a solution to the troubling shortage of middle-distance and staying horses being produced in Britain. He maintains the trend is predictable, with breeders breeding for speed and trainers wanting to buy yearlings with pedigrees and physical attributes to run as early two-year-olds.

He believes there are other difficulties, too. “To talk about breeding middle-distance horses and stayers is too vague a concept,” he says. “The gestation period for any plan would take too long, and even then, as a breeder, you never know what you are going to end up with.”

By way of example Smith highlights the fate of a colt he bred when he sent his Oaks fourth, Spot Prize, to Nayef. “When he popped out as a foal we stood there saying, ‘Here is our Derby winner’,” he reflects, “but the horse – Royal Prize – has turned out to be a six-furlong sprinter. He is running in good-class handicaps in France.

“You can plan all you like but I’m afraid nature and genes will always have their say,” he continues. “And is something actually broken? English horses have won the Derby [Golden Horn] and the Irish Derby [Jack Hobbs] this year, and an English-trained horse [The Grey Gatsby] won the French Derby last year.”

In Arabian Queen, who will be a very valuable addition to the Littleton Stud broodmare band when she retires, and Lingfield Derby Trial runner-up Magic Dancer, Smith has a pair of talented three-year-olds in training in Britain. It was a different story last year, when the Smith livery was carried to three Group-race triumphs in France, courtesy of Norse King and Cocktail Queen. Between them, those two earned more than Smith’s entire string of 40 horses at home.

“We had some terrific wins in France,” he says, “but it doesn’t make me want to have more horses trained there. Yes, prize-money matters, but I’m an Englishman living in England.”

That last sentiment encapsulates everything about Smith and his interaction with the Sport of Kings. Horseracing in Britain is probably the most competitive in the world, yet it takes place within some of the least advantageous fiscal parameters in the world. It is an irony best appreciated by an Englishman living in England.

Racing right to set up a direct negotiation with bookmakers

A wave of optimism swept through racing’s corridors of power in March when Chancellor George Osborne declared the intention to establish a horserace betting right, otherwise known as the ‘racing right’, under which bookmakers would have to pay to accept bets on British racing.

This right has long been sought by the BHA and its predecessors as a means of replacing the levy system, allowing the sport to close the loophole by which bookmakers with betting platforms outside Britain are not obliged to make levy payments.

While Osborne’s announcement was warmly welcomed by all in racing, bookmakers were quick to condemn the proposal, describing it as “unworkable”. Jeff Smith is inclined to agree. He has seen plenty of ‘game-changing’ financial scenarios come and go, and fears this will be yet another.

“I’m not for the racing right,” he says. “Personally, I think it could give rise to more problems that people simply don’t understand at this stage. It’s an easy latch-on.”

Smith highlighted the clamour within racing to buy the Tote as an example of unreasonable expectations. “We had this three or four years ago,” he says. “People were going around saying that buying the Tote would solve everything. Well, racing didn’t buy the Tote, and even if it had, it wouldn’t have done that.”

Against that, Smith believes the offshore drain on levy should be addressed as a priority. “It is clearly wrong,” he says. “There needs to be a solution that extracts some sort of payment from the offshore operators but that’s another thing that is easier said than done.”

He also feels that an agreement between racing and betting is the best long-term solution to the vexing question of racing’s beleaguered finances. “I believe the principle of setting up a direct negotiation with bookmakers is the right one,” he says. “I just don’t think it has been properly thought through.

“I think that, like Mark Twain, reports of the Levy Board’s death are somewhat premature. It wouldn’t surprise me if the Levy Board was still there in ten years time.” 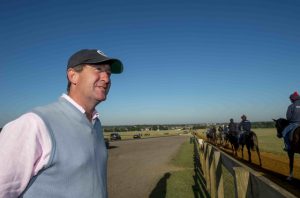 Up Next
Still dreaming ahead