Outstanding mare Enable will have only three opponents on Saturday when she bids to record a historic third victory in the King George VI and Queen Elizabeth Stakes at Ascot.

The daughter of Nathaniel won the contest as three-year-old in 2017 and prevailed by a neck over Crystal Ocean last year.

Trying to stop Khalid Abdullah’s six-year-old from landing the treble are the Aidan O’Brien-trained trio of Japan, Anthony Van Dyck and Sovereign.

Haras de Mirande resident Al Namix has been retired from covering duties due to declining fertility.

The son of Linamix has stood at the French operation since 2005 and is best known for supplying the National Hunt performers Elixir De Nutz, Saphir Du Rheu, Grandouet and Petit Mouchoir, winner of the Irish Champion Hurdle.

Darain, the full brother to multiple Group 1 winner Too Darn Hot, lines up for the second start of his career today when he contests the 1m2f novice stakes at Newmarket for owners Qatar Racing and Watership Down Stud and trainer John Gosden.

The three-year-old son of Dubawi made his debut at Newbury earlier this month when he was an impressive four and three-quarter length winner, striding away from his rivals in the final furlong.

There are also Flat meetings from Beverley, Ripon and Down Royal today and jumps fixtures at Cork and Newton Abbot. 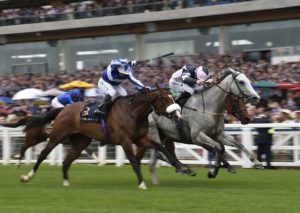 Up Next
Death of owner-breeder Geoff Turnbull