Enable scanned in foal to Kingman

Enable has been scanned in foal to Kingman, her owner Juddmonte Farms has revealed.

The outstanding mare, whose 11 Group 1 victories included back-to-back renewals of the Arc and three King Georges, was covered by Kingman on Valentine’s Day and confirmed in foal on a 15-day scan.

Juddmonte tweeted: “15 days after covering, champion Enable was this morning successfully scanned in foal to Kingman. Hopefully an exciting new chapter in this remarkable mare’s story.”

Enable retired last October following a brilliant career under the care of John Gosden that featured 15 wins in 19 starts.

Kingman, also trained by Gosden, has swiftly become one of Britain’s leading stallions as the sire of three Group 1 winners – Domestic Spending, Palace Pier and Persian King – out of his first two crops.  The son of Invincible Spirit is standing this season at Banstead Manor Stud in Newmarket for £150,000. 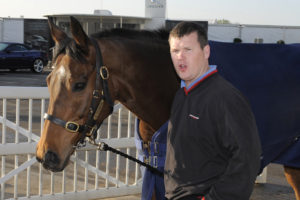 Up Next
Not welcome: Gordon Elliott banned from racing horses in Britain