Khalid Abdullah’s homebred Enable stole the show at the 2017 Cartier Racing Awards in London on November 14, named Horse of the Year and top three-year-old filly after her sensational season.

John Gosden paid tribute to the daughter of Nathaniel, the winner of five consecutive Group 1 races this year culminating in her scintillating victory in the Prix de l’Arc de Triomphe last month, saying she was easily the best filly he has ever trained.

Enable’s stable companion, Cracksman, was named top three-year-old colt following his devastating triumph in the Champion Stakes at Ascot. Owner-breeder Anthony Oppenheimer confirmed that Frankel’s son will stay in training next year, when he could well meet Enable in the Arc, which returns to its Longchamp home in 2018.

The ultra consistent Ulysses, winner of the Coral-Eclipse and Juddmonte International, took the older horse accolade, while outstanding three-year-old Harry Angel came out on top in the competitive top sprinter category, seeing off the likes of Battaash, Marsha and Lady Aurelia.

The Cartier/Daily Telegraph Award of Merit went to trainer Sir Michael Stoute. Usually somewhat reticent when interviewed at the races, Stoute appeared to relish the opportunity to speak his mind on stage with ITV Racing anchor Ed Chamberlin.

He thanked the jockeys who have ridden his big winners over the years, including Walter Swinburn and Kieren Fallon, said his 1-2 with Pilsudski and Singspiel in the 1996 Breeders’ Cup Turf was his outstanding racing memory, and named Shergar, Zilzal and Marwell as the best middle-distance performer, miler and sprinter that he has trained. 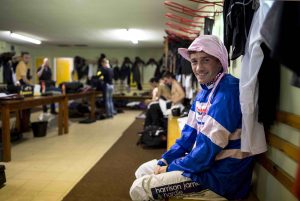 Up Next
Twiston shout