Elm Park brought the curtain down on the European Flat turf season in some style for Qatar Racing when becoming the operation’s first British Group 1 winner of the year and also the first Group 1 winner for his unheralded sire, Phoenix Reach, in the Racing Post Trophy at Doncaster.

Sheik Fahad Al Thani bought into the Andrew Balding-trained juvenile in early September following the colt’s win in the Listed Stonehenge Stakes at Salisbury. Continuing to race Elm Park in partnership with the Kingsclere Racing Club, for whom he started his career in the silks made famous by another Park House resident, Mill Reef, Sheikh Fahad was rewarded almost instantly when his new purchase collected the Group 2 Juddmonte Royal Lodge Stakes at Newmarket. Victory in the Racing Post Trophy takes his tally to four wins from five starts and has seen him made one of the leading fancies for next season’s Derby.

Elm Park is truly a son of Kingsclere. He was bred at the stud by Lady Emma Balding, as were his first four dams. His sire Phoenix Reach, who raced successfully around the globe, winning three Group 1 races for Andrew Christou, was the first leading light of the stable when Andrew Balding took over from his father Ian, who trained a number of Elm Park’s ancestors, including his damsire Dashing Blade, Elegant Air, Selkirk and Mill Reef.

Lady Balding has also been responsible for a number of other leading runners by Mickley Stud’s Phoenix Reach, including the Group-placed Whiplash Willie and multiple winners Rawaki and Chesil Beach.

Sheikh Fahad has enjoyed a successful few weeks around the racing world, with his juvenile filly Peace And War winning the Grade 1 Alcibiades Stakes at Keeneland, and Just The Judge and Trade Storm each notching Grade 1 victories in Canada. 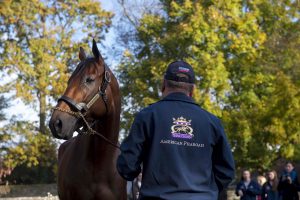 Up Next
Adelaide takes Melbourne by storm