An exciting finish to the Haldon Gold Cup (2m1½f), the feature race on Exeter’s card on Tuesday, saw Eldorado Allen battle past Hitman near the finish to take the spoils by a length.

With last year’s winner Greaneteen fading in the straight under the burden of 11st 10lb, fellow Paul Nicholls runner Hitman and Eldorado Allen had the race between them jumping the final few fences.

Hitman and Harry Cobden looked to have the initiative jumping the last but as he drifted to the rail, Brendan Powell conjured a late rattle from Eldorado Allen to edge ahead in the final strides.

The result proved a tonic for winning trainer Colin Tizzard following a difficult 2020/21 campaign when the stable recorded 37 winners, down from 61 in 2019/20.

This latest Grade 2 success for Eldorado Allen, owned by J P Romans and Terry Warner, followed victory for the yard’s Fiddlerontheroof in the Listed Colin Parker Memorial Chase at Carlisle on Sunday.

Joe Tizzard, assistant trainer to his father, said: “He didn’t travel all that well early on and Brendan said he was virtually flat out.

“It turned into a proper slog. It was good on the horse he stuck his head out really well and he has proved he will get a bit further now. We thought going to Aintree over two and a half miles last season would have been ideal, but he just ran a bit flat.

“He was second in an Arkle and off 151 you had to fancy him. He beat the right horse in my opinion. I think the right two fought it out, so it was a solid performance.

“They were needing their runs the first half of October, but they have just started to hit their straps now and it proves they are in rude health with themselves now.

“To go and win with Fiddlerontheroof and this one now is just what the yard needed. It puts it all to rest a little from what has been going on over the last 12 months.

“It is nice for us and good for the owners who have supported us all the way through. However well they run it is all about winners and we have got in the habit of having big winners and that is how we want to continue.”

He continued: “We will probably be looking at going a bit further now. He has won over hurdles and first time out over fences last year so he does go well fresh. We’ve not really got any plans so we will have to plot a path.

“Quite possibly the Peterborough Chase [at Huntingdon on December 5] could be a race we look at as he has put himself in that sort of bracket. He could be a Ryanair horse as we get further down the line.”

Also at Exeter, the McNeill Family’s Threeunderthrufive, trained by Paul Nicholls, proved far too good for his three rivals in the “Future Stars” Silver Bowl Novices’ Chase (3m), scoring eased down by 15 lengths under Adrian Heskin. 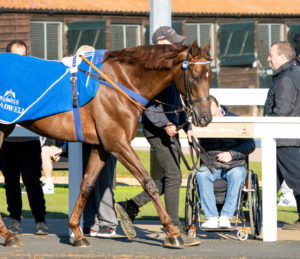