On what was described as a “dark day” for British racing, Godolphin trainer Mahmood Al Zarooni was banned by the British Horseracing Authority (BHA) for eight years following his admission that he gave anabolic steroids to 15 horses in his care.

The horses who received the drugs – which in Britain are prohibited not just for race days but also for horses in training – will be unable to race for six months from the day they were tested (April 9). They include the unbeaten Group 1 winner Certify, a former leading fancy for the QIPCO 1,000 Guineas in Newmarket on Sunday, May 5. The daughter of Elusive Quality tested positive for ethylestranol along with six others, while another four, including Group 2 winner Opinion Poll, were found to have been given stanazolol.

Al Zarooni, 37, who attended the disciplinary hearing at the BHA’s offices in London on Thursday with Godophin’s Racing Manager Simon Crisford, declined to comment on his ban and dismissal from Sheikh Mohammed’s Godolphin operation but a prepared statement was later read on his behalf by Crisford.

He said: “First and foremost, I would like to apologise to His Highness Sheikh Mohammed as well as to all those involved with Godolphin and the public who follow British racing.

“I accept that it was my responsibility to be aware of the rules regarding prohibited substances in Britain. I can only apologise and repeat what I said in my statement earlier in the week – I have made a catastrophic error.”

During the five-hour hearing, at which Al Zarooni had eschewed legal representation, the BHA disciplinary panel was told that the trainer had ordered two Godolphin foremen and a vet’s assistant to administer the anabolic steroids which he had brought to the country from Dubai. Eleven horses originally returned positive samples for steroids from 45 thoroughbreds tested during the BHA’s testing in training programme, while Al Zarooni later admitted that another four horses had been given the drugs.

Crisford said: “The vet’s assistant had no idea what he was injecting. He had a direct order from the trainer. Everybody knows that you can’t use steroids in England.”

In a statement issued immediately after the hearing, BHA Chief Executive Paul Bittar said: “We believe that it is recognised by all who follow our sport that the circumstances in this particular case are exceptional, not only on account of the profile of the owner in question, but also the number and calibre of the horses involved. However, we also believe the outcome is an endorsement for the effectiveness of British racing’s dope testing programme.”

Godolphin operates two large training establishments in Newmarket: Stanley House Stables, which is the base of long-term trainer Saeed Bin Suroor, and Moulton Paddocks, where Al Zarooni trained. The yard at Moulton Paddocks remains on lockdown following the shiekh’s orders that all horses stabled there be tested.

In a statement issued via the Godolphin website on Wednesday, Sheikh Mohammed said: “I was appalled and angered to learn that one of our stables in Newmarket has violated Godolphin’s ethical standards and the rules of British racing. I have been involved in British horse racing for 30 years and have deep respect for its traditions and rules.

“We will be locking down the Moulton Paddocks stables with immediate effect, and I have instructed that I want a full round of blood samples, and dope testing done on every single horse on that premises. I can assure the racing public that no horse will run from that yard this season until I have been absolutely assured by my team that the entire yard is completely clean. I have worked hard to ensure that Godolphin deserves its reputation for integrity and sportsmanship, and I have reiterated to all Godolphin employees that I will not tolerate this type of behaviour.” 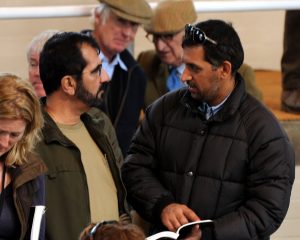