Edward Gillespie, the former Managing Director of Cheltenham Racecourse, has been appointed as the new Chairman of the Pony Racing Authority (PRA). He takes over from Charles Barnett of Ascot Racecourse, who has held the position for the last three years.

The sport of pony racing has only formally existed in the UK for eight years but has become one of the country’s fastest growing equestrian sports. Graduates from its ranks include Sam and Willie Twiston-Davies, Tom Bellamy, Harry Derham, Gina Andrews and Rhys Flint. The finals of the Charles Owen-sponsored pony racing series are held at Newmarket’s Rowley Mile in the autumn.

Gillespie said: “Pony racing in Britain is a massive success story. I feel greatly honoured to be asked to chair the PRA and shall do all I can to help the board, executive and the extensive support group build on that success.”

Clarissa Daly, who recently took over as Chief Executive of the PRA from Gillespie’s former Cheltenham colleague Rebecca Morgan, added: “It is such an exciting time for pony racing with some great initiatives planned. With Edward’s experience, passion and knowledge we really should be able to take the sport to the next level.

“Over 100 graduates from pony racing have already gone on to ride under rules with many more working within the racing industry; we are aiming to provide many more.

“The PRA is committed to increase the numbers from non-racing and non-horsey backgrounds and to make racing more accessible to children and young people from all walks of life. With Edward as our new Chairman we are better placed than ever to achieve this.”

The PRA’s aim of making pony racing more accessible has already been taken up by the British Racing School (BRS) which has developed a Pony Racing Academy for youngsters without their own ponies who wish to learn more about the art of race-riding. The BRS also runs two pony racing camps each year in April and August. For more information, please click here. 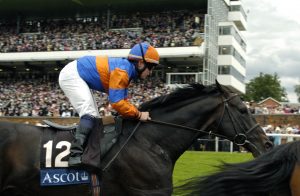 Up Next
Family ties lead to special three-timer