On the back of healthy sales at the end of 2016, Tattersalls started where it left off with this year’s February Sale which saw a number of records fall.

Held for the first time over two days, turnover surpassed the 2 million gns mark on each of the two days with a final total of 5.7 million gns which was more than double last year’s sale.

The largest contributor to the record total was four-year-old filly Easton Angel. A dual Listed winner over five furlongs, she had advertised her Group race credentials for trainer Michael Dods as a two and three-year-old.

She went under the hammer on the first day for 500,000 gns, snapped up by bloodstock agent Micky Flanagan. Offered by the Castlebridge Consignment, she attracted plenty of attention from the likes of Cheveley Park’s Chris Richardson and Arrowfield Stud’s Paul Messara.

“She is for a new undisclosed client. She stays in Europe – hopefully she is a good one to start with for the client. She has been bought to breed from, but I have been told that she has plenty of racing left in her, so we do have options. We’ll let the dust settle from here and take a view,” said Flanagan.

He added: “But she is a quick filly, a gorgeous physical and moves like a panther.”

With the turnover record well and truly broken, the same applied for the average and median. The average was up 56% on last year’s at 16,944gns while the median was up by 60% coming in at 8,000 gns.

The highest-priced lot on the final day was the twice-raced John Gosden filly Dream Waltz. She was knocked down to Laurent Benoit’s Broadhurst Agency for 105,000 gns.

Tattersalls Chairman Edmond Mahony, said: “The Tattersalls February Sale has achieved phenomenal growth in recent years and the 2017 renewal has taken it to a new level. As recently as 2010, the turnover at the February Sale was less than a million guineas and the average price below 7,000 guineas.

“This year we extended the sale to two days for the first time and the turnover has soared to nearly 6 million guineas, more than double last year’s record level, the average has reached a new record of 16,944 guineas and even last year’s impressive clearance rate of 82% has jumped to 89%.” 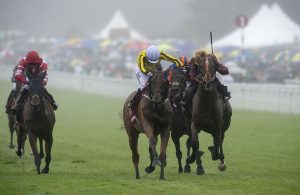 Up Next
Stayers' programme boosted