Still No.1, to be Frankie
Stories

Slade Power, who played a significant role in a memorable Royal Ascot for trainer Edward Lynam and owner/breeder Sabena Power, has been bought by Darley to join its roster of stallions in 2015. He will stand at Kildangan Stud in County Kildare.

The five-year-old son of Dutch Art brought up a Group 1 double for his connections when winning the Diamond Jubilee Stakes on the final day of Royal Ascot after his stablemate Sole Power got the meeting off to a terrific start with victory in the King’s Stand Stakes.

Slade Power has so far won nine of 18 starts, including the Group 2 QIPCO British Champions Sprint Stakes last October, and his new owners will be hoping he can continue his purple patch with success in the Darley July Cup on Saturday. He will remaining in training with Lynam until the end of the season and is likely to head to Australia in November to contest the VRC Sprint at Flemington, which forms part of the Global Spring Challenge.

Commenting on the new addition to the stallion ranks, Joe Osborne, Darley’s managing director in Ireland said, “Slade Power is an incredibly tough racehorse who consistently performs at the highest level. He’s the northern hemisphere’s best sprinter and with a physique to match, he’ll be a popular addition to our roster when he retires to stud at Kildangan at the end of the year.” 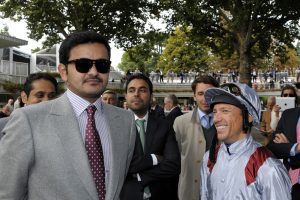 Up Next
Still No.1, to be Frankie