Richard Knight came out on top at €2.6 million in an epic tussle with Jacob West for the sister to Saturday’s Middle Park Stakes winner Blackbeard to headline the opening session of the Goffs Orby Sale on Tuesday.

Proceedings were buoyed by the presence of a large number of American buyers brought in at Goffs’ own expense on a jet out of New York. Such an initiative worked a treat last year and it was a similar story on Tuesday as the likes of Marquee Bloodstock, Stripes Stable, Top Line Sales, Bo Bromagen, Ben McElroy, Stonestreet Farm, Team D, Mike Akers, Jason Taylor, Justin Casse, DJ Stable and Clay Scherer each made purchases.

The session-topping daughter of No Nay Never also came close to heading stateside as Jacob West, fresh from signing for $10.6 million worth of stock at the Keeneland September Sale, did his best to land the filly.

Offered by Glenvale Stud on behalf of breeder Newstead Breeding in front of a packed ring, the filly attracted an opening bid of €300,000 before matters rocketed into seven-figure territory. Nick Nugent, taking instructions via phone, made a bold play but it rapidly became a battle between Richard Knight, standing ringside, and Jacob West, sitting directly opposite auctioneer Henry Beeby in the seats. Knight’s move to round up the bidding from €1.8 million to €2 million was countered by fierce competition from West but at €2.6 million the Goffs American representative cried enough, leaving the seats with a shake of the head.

Richard Knight, so active at a high end in Keeneland and Arqana, outbids Jacob West at €2.6 million for the No Nay Never sister to Blackbeard pic.twitter.com/KiTOb2b1hA

Knight has been busy on behalf of an undisclosed client throughout the season, spending €1.98 million on five yearlings at Arqana in August and another $4.875 million on six yearlings at Keeneland several weeks ago. Knight reported at the time that those American purchases would be split between Graham Motion and Brendan Walsh. However, this filly unsurprisingly will be campaigned closer to home.

“I thought she was the absolute stand out of the sale, regardless of who her brother is,” said Knight. “She’s a lovely size and shape, she’s very athletic. Every time I saw her, she showed the same. She was at the top end of what we thought we’d have to pay but we didn’t want to leave without her, so we’re delighted. She’ll go to the UK now and she’ll be trained in the UK, although exact plans haven’t been confirmed yet.”

The filly was bred by Newstead Breeding out of the winning Muirin, a Born To Sea daughter of Group 3 winner Girouette. The mare has really hit the ground running at stud since her first foal is Blackbeard; keep busy throughout the year by Aidan O’Brien, he has progressed with racing as victories in the Prix Robert Papin, Prix Morny and Middle Park Stakes on his most recent starts illustrate.

“It’s lovely to sell a filly like her,” said Ciaran ‘Flash’ Conroy of Glenvale Stud. “She’s an absolute queen, a lovely filly. She’s very typical of the sire but not dislike the brother, in fairness. She’s the same build, strong and sharp-looking.” 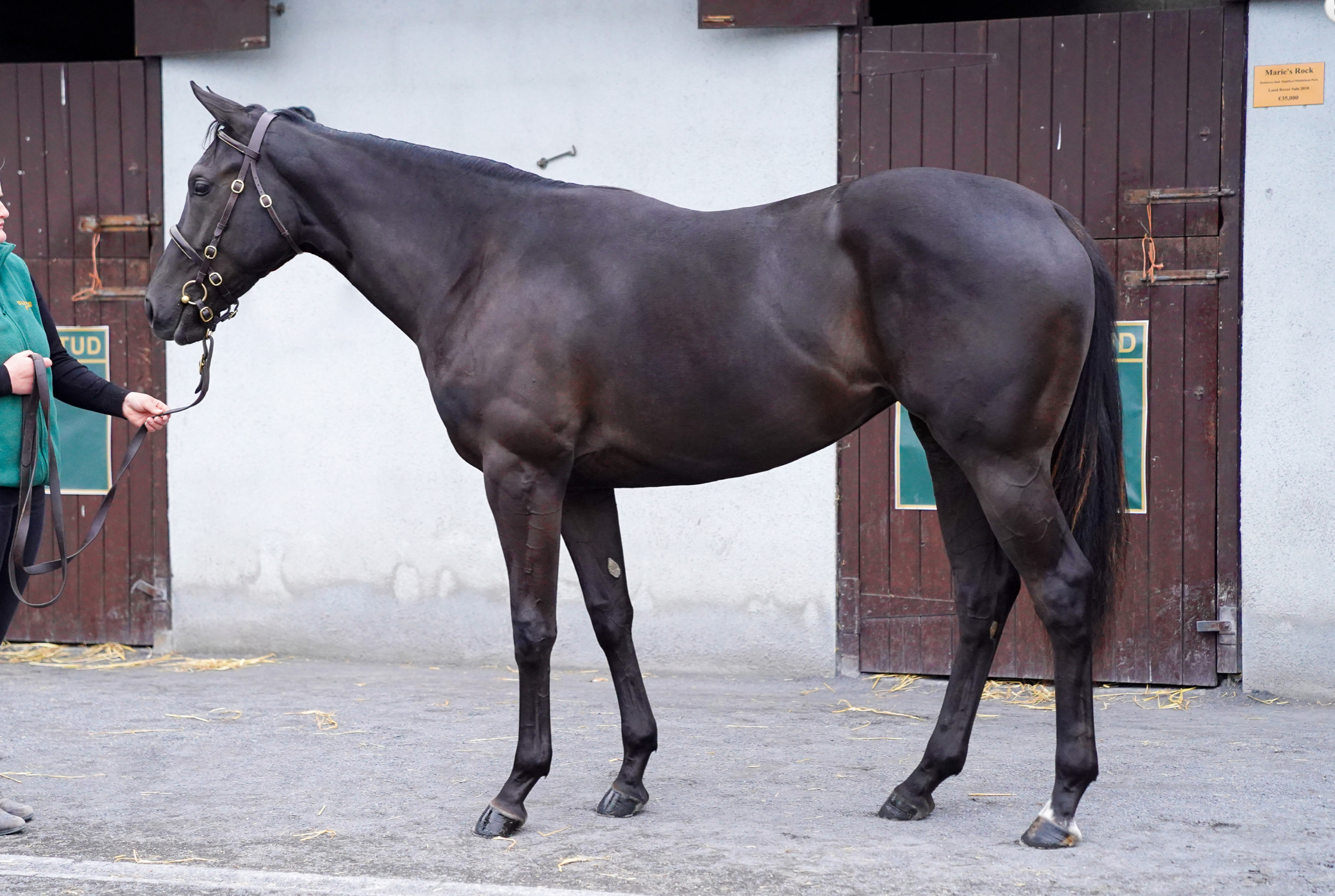 The No Nay Never filly out of Muirin. Photo – Goffs

It was also a productive day for Phoenix Thoroughbreds in its role as co-breeder thanks to the sales of pair of fillies from the penultimate crop of Galileo.

Co-bred with Coolmore Stud, the pair are collectors items regardless of whether they make the track or not given that they possess deep female families – as to be expected from youngsters by the multiple champion sire.

The filly is the first foal out of her dam, a daughter of Camacho who was also trained by John Quinn to run second in the Prix Morny.

“She was our pick of the sale,” said Colville. “She’s very good-looking and it’s a good cross, so let’s hope she’s lucky. Maurice is keen to build up a broodmare band. She’ll come back to me to be broken and we’ll have a think around Christmas time where to send her.” 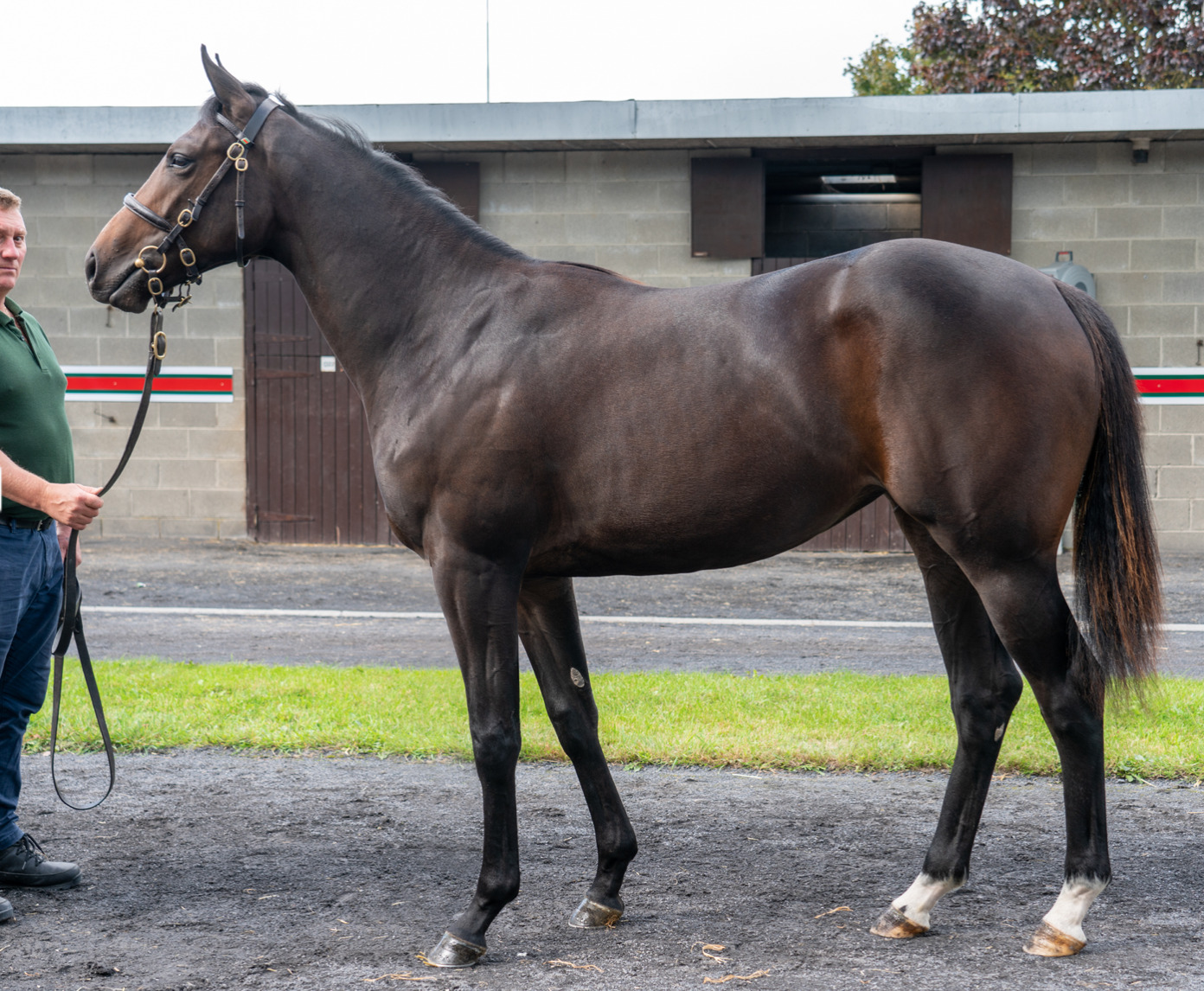 Donohoe, however, had better luck in his pursuit of the Galileo filly out of Nickname, for whom he signed at €430,000.

A sister to last year’s €1.5 million sale-topper Starry Eyed, who made an eye-catching debut for Aidan O’Brien at Dundalk last week, the filly was bred by Phoenix Thoroughbreds and Coolmore Stud out of the Grade 1 Frizette Stakes heroine Nickname. By the ever-popular Scat Daddy, Nickname was knocked down to Kerri Radcliffe, then acting for Phoenix, for $3 million at the 2017 Fasig-Tipton November Sale.

“She’s for an existing client, an owner-breeder,” said Donohoe of the Baroda Stud-consigned filly. “She’ll join his broodmare band in time and be trained in Ireland. She’s a nice physical with a good pedigree. The sister looks very promising – I think they like her.”

The last Galileo yearling filly to be bought by Donohoe prior to this year was none other than Magical Lagoon, successful in this year’s Oaks. The filly was sold by WH Bloodstock on behalf of Coolmore for 305,000gns.

As for Phoenix, it also sold a Galileo colt out of the Albany Stakes third Take Me With You for €310,000 to Joe Foley.

It was a busy day for Michael Donohoe, with the agent also coming out on top at €530,000 for Mountarmstrong Stud’s half-sister to Matron Stakes winner No Speak Alexander. She is the third foal out of her dam Rapacity Alexander, a Listed-winning sister to top Hong Kong runner Peniaphobia.

Mountarmstrong’s filly wasn’t the only daughter of Night Of Thunder to attract her share of admirers.

Mark McStay of Avenue Bloodstock went to €350,000 for the half-sister to last week’s Rosemary Stakes winner Zanbaq, bred and sold by Bobby and Honora Donworth of Roundhill Stud out of their famous Princess Serena family. Roundhill paid $150,000 for the Unbridled’s Song mare at Keeneland in 2005 and went on to breed a number of high-class performers out of her led by Group 1 scorer Zabeel Prince and the Group 2 winners Puissance De Lune and Queen Power. Another daughter, Serena’s Storm, is the dam of champion Rizeena.

Princesse De Lune, a Shamardal sister to Puissance De Lune and Queen Power, won a smart maiden for the Donworths and Roger Charlton at Newbury in 2017. And she has been quick to make her mark at stud as the dam of Listed scorer Zanbaq, who topped the 2020 Covid-stricken renewal of this sale.

“She’s a lovely, gorgeous filly,” said McStay. “She’s by a sire I know well and we’ve all seen what he can do with his fillies this year. This filly had a nice update with the sibling winning a stakes race – it’s a great family. Hopefully she’ll be a good racing prospect for her new owner but more importantly, she could become a foundation mare if he wants to breed down the line.

“She’s for an international owner who races plenty of horses in England. He was very keen to get her. He’s been very supportive of me and I hope she’s very, very lucky for him.”

For those offering progeny of Night Of Thunder, it turned out to be an excellent day on Tuesday. They included Lodge Park Stud, whose filly out of the Listed-placed Skill Set was knocked down to Rabbah Bloodstock at €340,000 following a protracted duel with Anthony Stroud.

It’s not often that you find the relation to a top-class jumper in a premier Flat yearling auction but Paddy Behan’s decision to send his half-brother to Altior to this sale paid off as the son of Mastercraftsman went on to sell for €150,000.

Altior, of course, was one of the iconic two-miler chasers of modern times whose 21 wins included two renewals of the Queen Mother Champion Chase, an Arkle Challenge Trophy and Supreme Novices’ Hurdle. His dam, the Grade 3-winning hurdler Monte Solaro, is also responsible for Grade 2 winner Princess Leya.

From the penultimate crop of his much-missed sire Mastercraftsman, this colt possessed a June 25th birthdate. However, that failed to deter buyers, with Hamish Macauley striking the winning bid of €150,000.

“He’s actually for [leading Australian trainer] Ciaron Maher,” he said. “He’s a beauty with a bit of Mastercraftsman about him. I’d say he’ll go into training in Ireland first – we’ll see how he goes and then he can go to Australia.”

Overall, the most expensive colt of the day was a Frankel son of Canadian Group 1 winner Miss Keller, who was sold by Churchland Stud for €360,000 to Peter and Ross Doyle.

The sale continues on Wednesday from 9.30am. 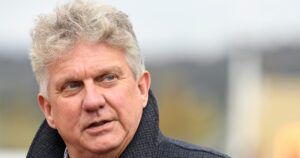 Up Next
The Finish Line - with Milton Harris