A €1.6 million son from the final crop of the much-missed Shamardal lit up the opening session of the Arqana August Sale in Deauville on Saturday.

In a landmark result for breeder Gestut Ammerland, leading Japanese trainer Yoshito Yahagi and Anthony Stroud of Godolphin, which has done so much to craft the stud career of Shamardal, clashed on the colt, with the latter ultimately coming out on top following a lengthy and frenzied bidding battle.

On a day when the average checked in at €177,339, the colt’s sale brought the curtain down on an illustrious association between Shamardal and the sale ring. Although never in the commercial league of Dubawi, 21 of his yearlings have realised 500,000gns or more headed by the 1.7 million guinea colt Chess Master. This second millionaire is one of only 17 yearlings from his final crop and just one of six colts, making Godolphin’s determination to land the colt all the more understandable.

For the last part of his life, Shamardal was virtually a private stallion to the Maktoum family. However, he did cover a select group of outside mares in his final season, one of whom was Lady Frankel, Gestut Ammerland’s talented half-sister to one of Shamardal’s best sons Lope De Vega, now a leading sire. Lady Frankel wasn’t quite in the league of her Classic-winning sibling but she was still an excellent performer for Ammerland who won the Group 3 Prix de Lieurey and ran third in the Group 1 Prix de l’Opera.

This second millionaire is one of only 17 yearlings from his final crop and just one of six colts, making Godolphin’s determination to land the colt all the more understandable.

“He is a very beautiful colt who moves very well,” said Stroud. “He is by Shardamal, a fantastic stallion with whom we have had great success. We are very happy, he comes from a beautiful family and a recognised stud.” 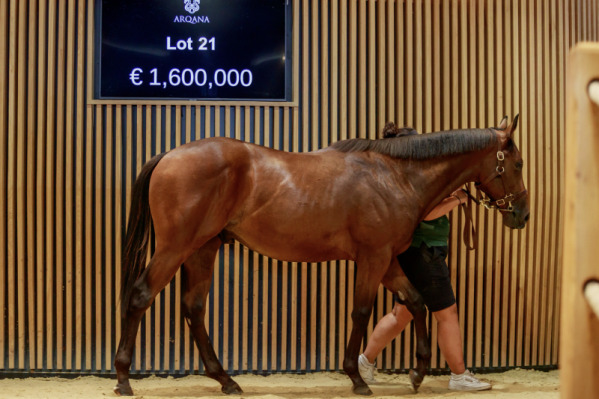 Anthony Stroud went to €1.6 million for this son of Shamardal. Photo – Zuzanna Lupa

Shamardal also had a hand to play in the background of a popular Sea The Stars colt who realised €680,000 to Sebastien Desmontils of Chauvigny Global Equine, acting on behalf of owner Hisaaki Saito.

It was a momentous result for vendor Haras du Mont dit Mont, who are offering a select draft of three at this sale, while providing his Listed-winning dam Shamtee with an excellent start in her career as a broodmare. He is the first foal out of Shamtee, a Shamardal great-granddaughter of his own granddam Helen Street, meaning that not only is the mare inbred to the blue hen but is also related to Street Cry and Territories.

“He’s a magnificent colt that walks very well,” said Desmontils. “His physique is a mix between what you would expect from a son of Sea The Stars and Shamardal as a damsire. I’ve bought him for my client Mr. Hisaaki Saito, and we are delighted! We haven’t yet decided who will train him, but it will no doubt be in Chantilly, where all Mr. Saito’s horses are trained.”

It was at this sale last year that Jose Delmotte’s Haras d’Haspel sold a Kingman filly for €950,000 to Godolphin. At the time, her half-brother Native Trail looked to be one of the most exciting two-year-olds of the season, with a win in the Group 2 Superlative Stakes to his credit, a view that he later backed up in resounding style when the dominant winner of the Group 1 National Stakes, Dewhurst Stakes and Irish 2,000 Guineas.

It was that kind of residual value that prompted Kieran Lalor, general manager of Sheikha Fatima Bint Hazza Bin Zayed Al Nahyan’s Al Shira’aa Farms, to stretch to €550,000 for this year’s offering out of the mare, a filly by Siyouni.

“She is by Siyouni, a stallion that needs no introduction and comes from a very lively family full of black-type,” he said. “We are very happy and hope a lot for the future!”

The filly is the fourth foal out of her dam Needleleaf, who was purchased by Delmotte through MAB Agency for a relatively inexpensive 60,000gns as an unraced two-year-old. The Juddmonte-bred daughter of Observatory is a sister to top sprinter African Rose and Group 3 winner Helleborine, the dam of top two-year-old Calyx.

The ambition of Al Shiraa’a to play at the top table, and thereby build an elite broodmare band, has long been on show; for instance, last year’s yearling purchases included the half-sisters to Waldgeist, Poetic Flare and Mother Earth.

Recent forays into the Arqana yearling market also yielded the Group 2 Prix de la Nonette winner Rumi and on Saturday evening, they dipped into the well again, this time paying €570,000 for Rumi’s Galileo three-parts sister from Ecurie des Monceaux. The filly is also a sister to Listed winner Solage and out of Secrete, a Cape Cross half-sister to the Wertheimer’s multiple Group 1 winner Plumania, in turn dam of the classy Plumatic, and Group 2 winner Balladeuse, in turn the dam of Prix Vermeille heroine Left Hand. 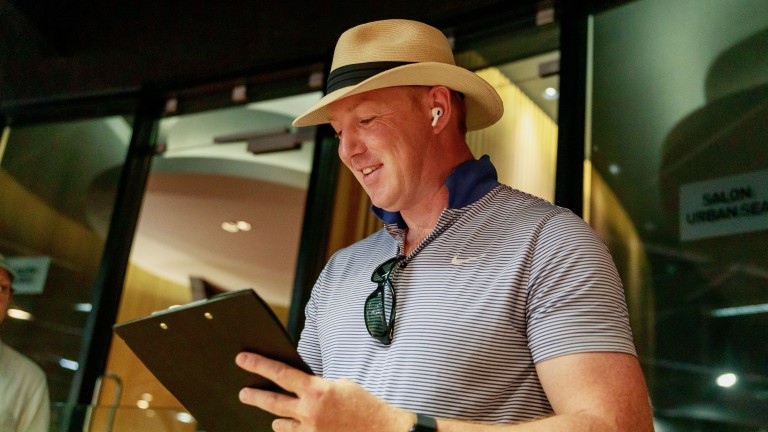 France’s champion sire Siyouni was also later on the mark as the sire of a colt out of the Listed winner Sapa Inca for whom MV Magnier and Peter Brant’s White Birch Farm paid €580,000.

Bred by the China Horse Club and offered as part of the powerful Ecurie des Monceaux draft, the colt is from a family that Ballydoyle knows well given that Sapa Inca is a sister to its Group 1 Criterium International winner Johannes Vermeer, Group 2 Kilboy Estate Stakes winner Elizabeth Browning and the Group 1-placed Wembley. As for Brant, he has a very real reason to appreciate the Siyouni – Galileo cross since one of its most important flag-bearers is his Arc hero Sottsass.

“He is a very beautiful colt with a beautiful pedigree,” said Magnier. “We all loved him. He’s going to join Ballydoyle.”

Magnier also went to €550,000 to secure the fourth lot into the ring, a strapping son of Coolmore resident Wootton Bassett.

Sold by Haras de Castillon, the colt hails from the final Haras d’Etreham-bred crop of his sire and is a half-sister to the Group 3 Prix de Psyche winner Penja. They are out of Just With You, an unraced Sunday Break sister to popular Group 2-winning Dubai campaigner Frankyfourfingers.

All told, 112 of the 133 yearlings through the ring changed hands for an average price of €177,339, generating a turnover of €19,862,000. Given the change in sale format – yearlings have been catalogued alphabetically across the three days rather than by session – comparisons are unable to be made with last year.

The sale continues on Sunday with an evening session after racing at 5.30pm. 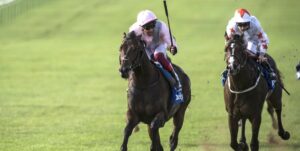 Up Next
Early judgement