Friday’s catalogue didn’t disappoint, yielding a top price of 700,000gns amid an impressive clearance rate of 87%

The spending power of end users and pinhookers clashed in Newmarket on Friday to produce a vibrant third session of the Tattersalls December Foal Sale.

The third day of selling is traditionally the strongest of the four-day auction and Friday’s catalogue didn’t disappoint, yielding a top price of 700,000gns amid an impressive clearance rate of 87%.

The catalogue offered just three chances to purchase the progeny of Dubawi and unsurprisingly two of the colts in question attracted the attention of Sheikh Mohammed’s Godolphin operation, who went on to pay a total of 1.3 million guineas for the pair through Anthony Stroud.

The Dubawi half-brother to champion two-year-old Skitter Scatter, winner of the Moyglare Stud Stakes, led the way on a valuation of 700,000gns. As such, he becomes the joint second highest priced colt to sell at this sale; top billing continues to belong to Padua’s Pride, who sold for 2.5 million guineas to the BBA in 1997.

The colt was bred by Airlie Stud out of Dane Street, a Street Cry half-sister to Dewhurst Stakes winner Intense Focus.

“Obviously we love Dubawi,” said Stroud after outbidding Philipp Stauffenberg. “And this is a very nice, good-looking, athletic individual who comes from Airlie, a great nursery. In all these decisions, it’s just about trying to find quality and this was a horse that all the team liked.” 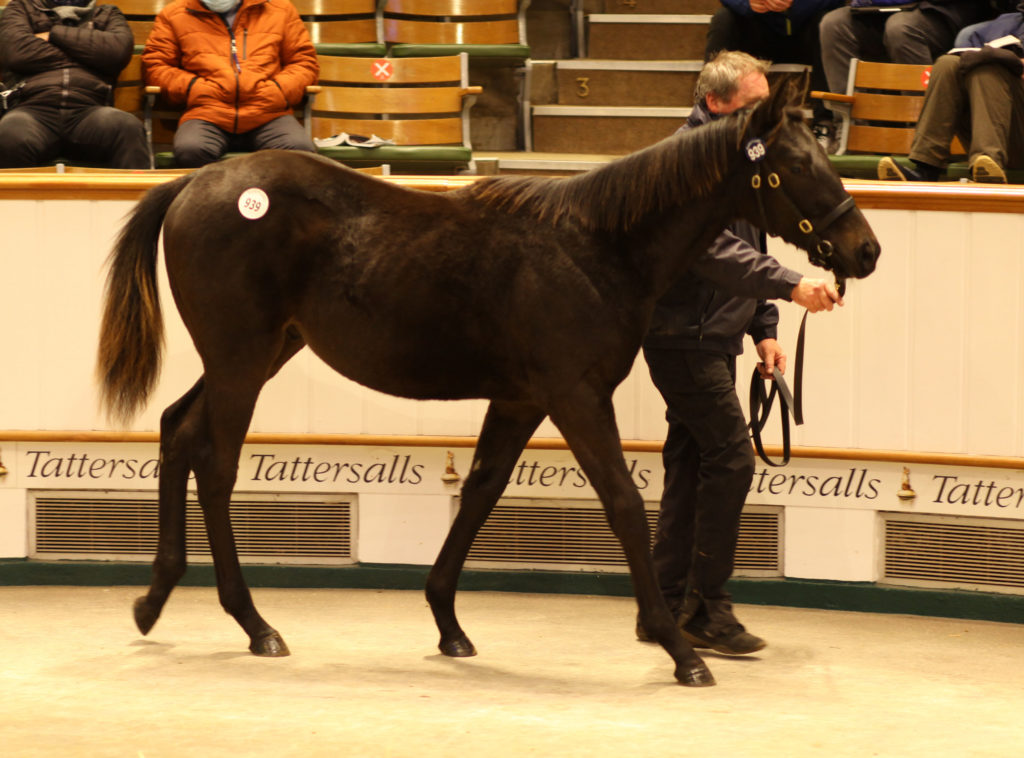 A Dubawi half-brother to Skitter Scatter sold for 700,000gns to head the third session of the Tattersalls Foal Sale. Photo – Tattersalls

Out of Listed winner Baisse, the colt was bred by Gerhard Schoeningh and sold through Fittocks Stud.

“It’s a great result,” said Sara Cumani of Fittocks Stud. “We’re delighted with where he is going.

“He’s a lovely colt who vetted extremely well. This is Gerhard Schoeningh’s only mare, but what a mare to have, and they have retained her yearling filly by Nathaniel, who is gorgeous.”

In addition to Best Of Days, who enjoyed his finest moment in the Cantala Stakes, the colt is a brother to a two-year-old, Summerland, who also lit up this ring in 2018 when purchased by Stroud for 725,000gns.

Dubawi was also represented by a filly out of Listed winner Joyful Hope, a sister to champion Crackerjack King, who sold out of the New England Stud draft for 310,000gns to Andreas Putsch’s Haras de Saint Pair.

While Godolphin’s name appears against just the two Dubawi colts so far this week, it is worth noting the depth of activity by the Japanese-based Paca Paca Farm, the private operation of Darley Japan’s representative Harry Sweeney. With 11 bought so far for a total of 1,471,000gns, Paca Paca reigns as the week’s leading buyer. 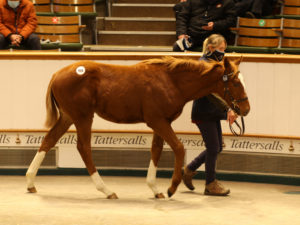 This Frankel half-brother to Alkumait will race for Juddmonte. Photo – Tattersalls

Juddmonte Farms further underlined their support for Frankel with the purchase of two foals by its leading stallion over the course of the day.

The colt is out of Whitsbury Manor Stud’s excellent producer Suelita, a 21,500gns purchase by the stud in 2013 who has also thrown Listed winner The Broghie Man and Gloves Lynch in the years since. He capped an excellent week of selling for his breeder, the vendor of 1,209,500gns worth of stock in total.

“He is an incredibly well-balanced foal, a strong foal,” said Mockridge of the May-foaled youngster. “The mare has already produced two very good horses and the mare suited Frankel. This is the kind of animal that we are looking for.

“We struggled to buy yearlings, they were making a lot of money. We have got two by Frankel today so we are very happy.” 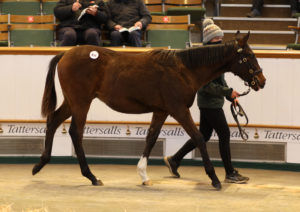 An online bid of 300,000gns from Oneliner Stables secured this brother to Phoenix Of Spain. Photo – Tattersalls

Fresh from landing Thursday’s session-topping Sea The Stars colt with an online bid, pinhooker Gerard Lowry of Oneliner Stables repeated the trick on Friday, utilising the platform to purchase a Lope De Vega brother to Classic hero Phoenix Of Spain for 300,000gns.

The colt was sold by Newtown Stud on behalf of Arild Faeste and his daughter Nina of the County Waterford-based Tourgar Bloodstock. He is the tenth foal out of Lucky Clio, a grand servant to the family whose seven winners are led by the 2019 Irish 2,000 Guineas winner Phoenix Of Spain in addition to the stakes-placed trio Central Square, Kingsdesire and Lucky Beggar.

Cathy Grassick of Newtown Stud purchased Lucky Clio on behalf of the late Cherry Faeste for just 17,000gns in 2007, and understandably watched on today with pride.

“I would say there are a couple of very emotional people back in Ireland,” she said. “Cherry [Arild’s late wife] passed away in the middle of Phoenix Of Spain’s career and did not get to see him win the Guineas.

“This colt is a different colour to ‘Phoenix’ but very similar in temperament and walk – he has the same characteristics. They are unflappable, very athletic and that was what appealed about Phoenix – when he came to the sale he stepped up a gear and handled it really well, and so did this horse. I hope he is very lucky for the buyer, he is a lovely horse.

“Arild does everything in the year with them – we just get them to foal and prep for the sales. He does a great job and it is great farm.”

The part dispersal of foals from Floors Stud was understandably greeted with enthusiasm, ultimately turning over 600,000gns in total sales for seven sold.

Offered through Kiltinan Castle Stud, the group were led by a Lope De Vega colt out of the Listed-placed Hibiscus, for whom Yeomanstown Stud paid 220,000gns. Hugo Merry was the immediate underbidder on the colt, whose dam is a sister to Breeders’ Cup Juvenile Turf hero Line Of Duty and out of the demoted 1,000 Guineas winner Jacqueline Quest.

The stud’s former owner, Sir Guy Innes-Ker, the 10th Duke of Roxburghe, passed away last August at the age of 64. His legacy within racing circles will always go hand in hand with Attraction, an ill-conformed homebred filly who captured the hearts of the racing public during a lengthy racing career highlighted by wins in the Newmarket and Irish 1,000 Guineas.

The part dispersal continues next week at Tattersalls with the sale of seven mares, again through Kiltinan Castle Stud. In addition to Hibiscus, the group includes a pair of half-sisters to Attraction in Fusion and Federation. 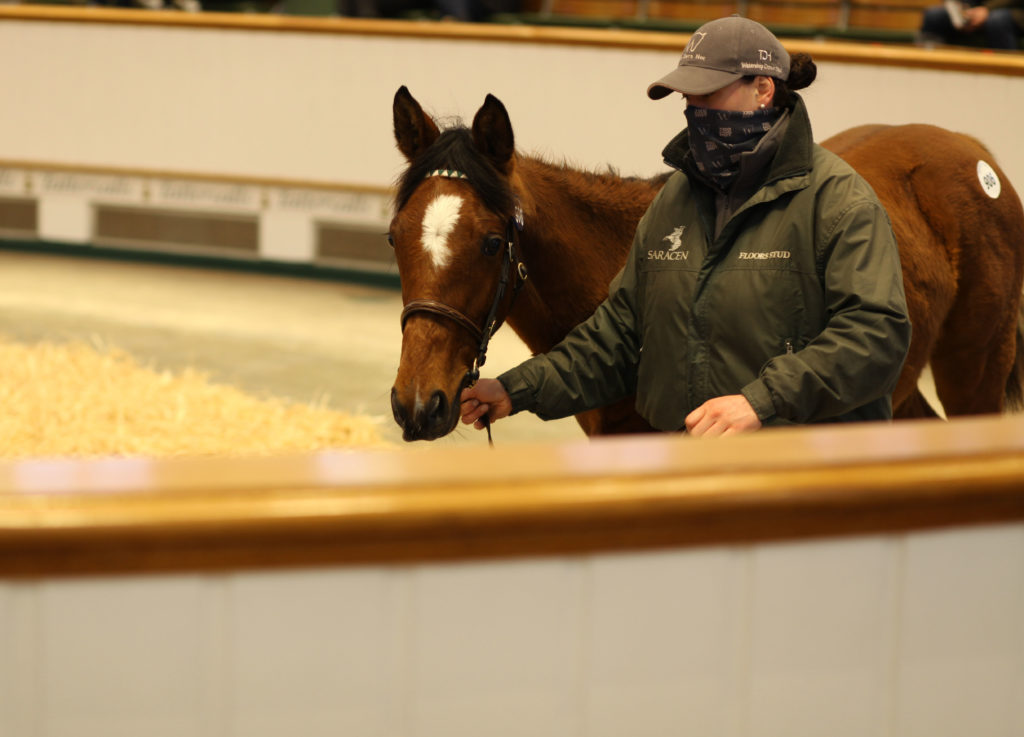 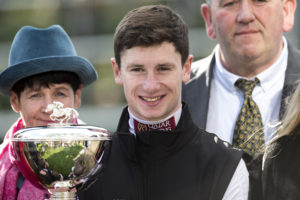