Shamardal's story far from over
Stories

Top Australian sprinter Redzel, who famously landed back-to-back editions of The Everest in 2017 and 2018, has had the curtain brought down on his illustrious career.

His owners Triple Crown Syndications announced the decision on Thursday having taken the Easter weekend to decide on the seven-year-old’s future, after trainers Peter and Paul Snowden recommend Redzel be retired after finishing third in the Group 1 TJ Smith Stakes at Randwick earlier this month.

In a statement published on their website, the syndicate said: “Although an Everest three-peat proved to be a bridge too far, Redzel returned this preparation with three further placings, two of which came at Group 1 level. The most recent of those came when a gutsy third in a vintage renewal of the TJ Smith Stakes, where he was again ridden to perfection by Kerrin McEvoy.

“That performance, at the grand old age of seven, transpired to be his swansong, and a befitting one at that. It encompassed everything we know and love about Richie – guts, determination and an incredible zest for racing.

“He retires a dual winner of The Everest, a race that is now widely regarded as the world’s premier sprint contest. He also retires as a dual Group 1 winner, a champion sprinter and the second highest prize-money earner in the history of Australian racing.

“His ownership group has now collectively decided to put the horse first to ensure he retires a happy and healthy horse after such a magnificent race career.

“To those who bought him as a yearling, he is ‘the dream horse, beautifully natured and a true champion’. To those who trained him he is ‘the most genuine horse we’re lucky to have had.’ To Australian racing, he will forever be remembered as the king of the mountain.”

All funds raised from The Furlong Factor will go to Racing Welfare’s Covid-19 Emergency Appeal as the charity has experienced a significant drop in income with the loss of fundraising events and activities.

Free to enter, those wishing to take part can do so on their own, as a duet or with a group if social distancing rules are adhered to. Competitors must be working in the UK either in a stud, yard, racecourse, administration, media or ancillary service or be a current racehorse owner.

The best and most entertaining entries will go through to a round of heats, which will run from April 29 to May 4, with each heat generating a winner via a public vote. The winners will then go through to the final on May 9.

During the final, racing fans will have the opportunity to back their favourite contestants through Racing Welfare’s betting partner, the Tote, before voting is opened on Twitter to find the winner.

The champion will receive a cash prize of £1,5000, an all-expenses-paid trip to the Prix de l’Arc de Triomphe courtesy of Racing Breaks and The Furlong Factor Trophy.

Susannah Gill, Tote Director of Communications and Corporate Affairs, said: “We’re delighted to support The Furlong Factor, which promises to be a lot of fun and look forward to hearing the musical talent on show within the racing community.

“All profits from the betting on the final on May 9 will go to Racing Welfare, whose team simply do an amazing job helping so many people in the sport, which has never been more important than it is now.” 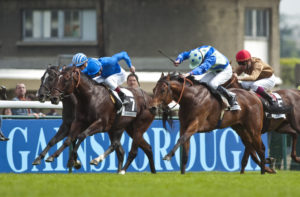 Up Next
Shamardal's story far from over