This year’s Epsom and Irish Derby winner Harzand, has been retired to Gilltown Stud where he will stand as a four-year-old alongside his father Sea The Stars.

His highest-rated son, Harzand was only once raced as a two-year-old but blossomed into a strong Derby contender at the start of his three-year-old campaign.

Two comfortable wins on slow ground in a maiden and in the Group 3 Ballysax Stakes at Leopardstown in April confirmed him as a prime candidate for the upcoming Classics.

Drama awaited the colt before travelling over to contest the Epsom Derby. On the very morning of the race prior to his flight to England, he suffered an injury to his foot when pulling a shoe off, drawing blood in the process.

In what was described at the time as a 60/40 by his trainer Dermot Weld and connections, the decision was taken to run him. He certainly didn’t disappoint in justifying that call.

Under Pat Smullen, he ran out a one-and-a-half length winner from the Ballydoyle pair – US Army Ranger and Idaho – giving his trainer a landmark first triumph in the world’s most prestigious Flat race.

Three weeks later in the Irish equivalent at the Curragh, he joined battle again with Idaho. Once more he came out on top under a power-packed Smullen, displaying true grit and determination on just his fifth racecourse appearance.

“I don’t think I’ve ever ridden such a courageous horse. I just can’t get over his courage in the last half-furlong. He’s so tough and he’s not just tough, he’s got pace,” reflected Smullen.

The final two starts of his career – in a hot renewal of the Irish Champion Stakes and the Prix de l’Arc de Triomphe – didn’t quite go as planned finishing eighth and ninth respectively. Nevertheless, he goes down as the leading colt of his generation in Europe over the Classic distance of a mile-and-a-half.

“He’s been a wonderful horse to train. It’s been a team effort. It hasn’t been the easiest – when he spread the plate before Epsom it was nerve-racking – but it was guts and courage that won the day,” said Weld.

He continued: “He then went on antibiotics as he picked up an infection after Epsom but he came back stronger than ever to win the Irish Derby.”

Weld also trains Haripour, Harzand’s three-parts brother who made a pleasing debut earlier this month and no doubt will be looking to continue the family’s success next year.

Harzand made the trip from Rosewell House to Gilltown Stud in County Kildare three days ago and is currently adapting to his new surroundings, the transition having gone smoothly.

As well as joining his sire, he will be standing alongside another close relation in Born To Sea, who was placed in the Irish Derby and has made a fine start with his first crop of two-year-olds this year.

Pat Downes, General Manager at HH The Aga Khan’s Irish Studs said: “It is always a great thrill to retire a homebred colt and completes the circle from when we decided to send Hazariya to Sea The Stars, and there is great satisfaction in that.

“I hope he will pass on his ability and courage to his progeny and if he does I think he will prove his value to breeders, he is by a champion racehorse and one of the top young European stallions out of a very talented 1400m Group 3 winner in Hazariya.” 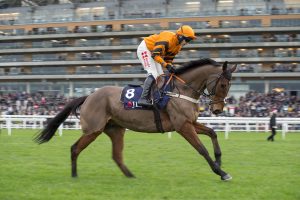 Up Next
Glorious start for Thistlecrack