Running the rule over the stallion bargains available to breeders
Stories

Three-year-old son of Mehmas was bought by Bert Kerr for €50,000

Dual winner Drish Venture commanded a fee of €50,000 to top Part 1 of the Goffs February Sale on Tuesday, which was held as an online virtual sale owing to Covid-19 restrictions in Ireland.

Both of Drish Venture’s victories have come at Dundalk, over five and six furlongs, and given his profile, it was Brett Kerr who purchased the exciting prospect, who had last been seeing finishing third at Dundalk on Friday.

Speaking to Racing Post Bloodstock, Kerr said: “It was our first attempt online and it is the future, I accept all that. It’s a nice way to start this new year, particularly as we’ve bought a horse online. It shows we’re not standing still, anyway.

“He’s for an existing client of ours in Central Europe and I had been looking for a hardy sprinting type, so we were delighted to get him.

“He was third last Friday at Dundalk, up against older horses. He was up in front and he just battled on to keep a position, so that confirmed that he could do a job for us.”

The Aga Khan draft is always a popular draw at this auction and it was Chris Timmons who came away with the three-year-old Razdan after a bid of €32,000. 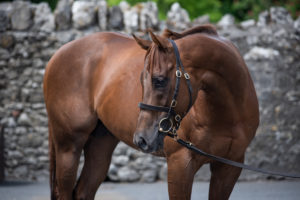